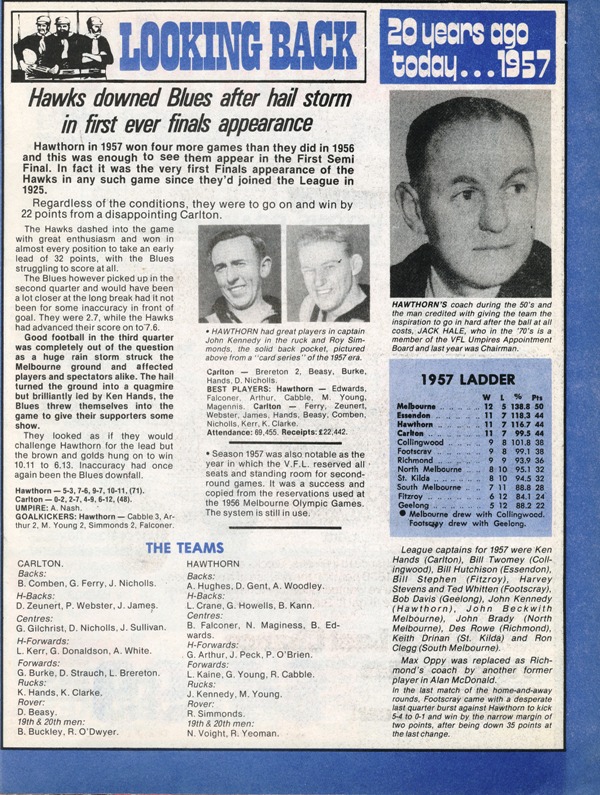 Hawthorn were making their very first finals appearance since their admission to the VFL in 1925. Carlton entered the game as favourites because of Hawthorn's inexperience, but the Blues had lost three of their previous fours games leading into the finals series.

Hawthorn started well, kicking 5 goals to nil in the first term. The Blues had missed three sitters in the first quarter, and although they evened the game up, could not claw back any of the lead by half-time.

A huge storm at the major break played into the Hawks hands, Carlton was having to try and peg back the lead on a saturated oval. After kicking two goals in the third, the Blues supporters hopes were raised, but they team couldn't make any further inroads and Hawthorn went on to win by 23 points.

In their first ever appearance in a Finals game, Hawthorn defeated Carlton to win the 1st Semi Final by 23 points. The Hawks have enhanced their Premiership chances, showing they have the skill and judgement to use the big MCG. They made clever use of the wind in the first quarter to open-up an advantage that was never lost. Several Carlton attacks broke down through over-eagerness and the greasy conditions that followed a severe hailstorm. - 100 Years of Australian Football.