The Lions were a gathering force but took the field against last years Grand Finallists without key bigman Daniel Bradshaw & small forward Luke Power, both of whom had kicked over 50 goals for the season. Bradshaw caused something of a stir by pulling out of the game to be by his wife's side for the birth of a child.

Without the two main forwards, the Lions didn't have the defensive options to match Carlton's emerging and young forward line of Aaron Hamill, with a Carlton career high of 7 goals, and Brendan Fevola, with 4. Our forward entries were fast, and often marked by these 2 gents as the Blues ran away with it.

Little did we realise that Hamill, so key a player in this game, would soon leave our shores.

The most significant moment in a game that we had won early happened late in the game. SOS was by himself and about to pick up a ball on the ground on the half-back flank. He bent down and ripped the hamstring tendon from his bone. He fell to the ground as if shot and as the trainers attended to him the 3/4 time siren sounded after which you could have heard a pin drop as a stunned crowd witnessed SOS escorted off the ground. Until finally when he neared the players race the crowd broke out into applause for the club champion.

Despite the fact that we ended up with a sensational win after the disappointment of the loss to Melbourne in a last quarter fadeout the previous week, most Carlton supporters would have left the ground thinking the finals campaign was over. And it was. 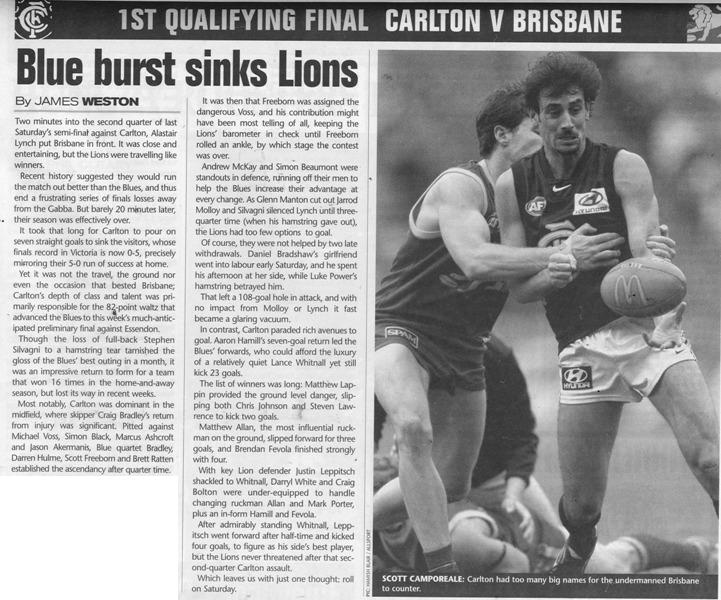