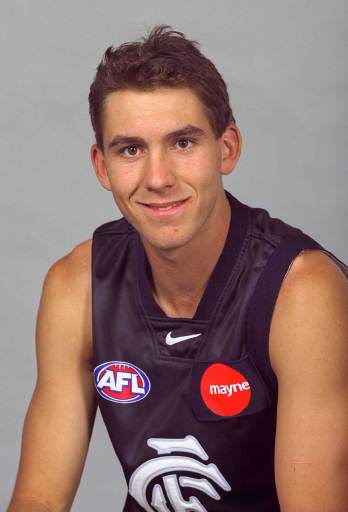 Picked at 46 in the 2000 National draft, O'Keeffe was a left foot half back flanker / defender, who appeared to be able to run all day but couldn't earn enough of the ball- never more than 8 possessions in any of the 6 games he ended up playing.

He spent all of 2001 in the VFL and would not play his first game until Round 17 of the following season. He would manage just one more game in 2002 - the thrashing at the hands of Collingwood the following week. At the end of 2002 he was de-listed but picked up again as a Rookie and promoted back to the senior list for the Round 18, 2003 match and went on to play the next 4 games (2 as a late change) before again being delisted (permanently).

O'Keeffe was a strong performer at VFL level in 2003, earning himself a promotion to the Carlton senior list. He was delisted at the end of that season, having played 6 games and kicked 1 goal.

O'Keeffe was recruited from the Murray Bushrangers U/18's, he had previously played at Wangaratta Rovers, Centrals Junior FC (Wangaratta) and Glenrowan.

O'Keeffe signed on to play with VFL team Sandringham for the 2004 season. O'Keeffe has since had a distinguished football career at state and country level. He played for Sandringham in the Victorian Football League from 2004 to 2005, winning premierships in both years and winning the club Best and Fairest and being named in the VFL Team of the Year in 2005. In 2006, O'Keeffe moved to South Australia and played for Sturt in the SANFL until 2007. In 2008, he moved to Kalgoorlie, and played for Kalgoorlie Railways in the Goldfields Football League, winning the Mitchell Medal, as league best and fairest, in 2009. In 2010, he returned to his former club Wangaratta Rovers, winning the club best and fairest in his first season back. O'Keeffe is still at Wangaratta Rovers, Winning his second best & fairest in 2016. .

O'Keeffe works as an electrician in daily life