There was drama before the game when George Bailey who was originally named in the team was replaced by Davies by a match committee who thought Bailey was not fit to play. It was then that the Carlton Doctor arrived and announce to the match committee that Bailey was fit to play. Unfortunately by that time it was too late to include Bailey in the 18 and Davies had to take the field.

Little separated the sides through a fine first half with Collingwood leading by 4 misses. The Blues added 4-1 to 3-3 to tie it up at orange-time. 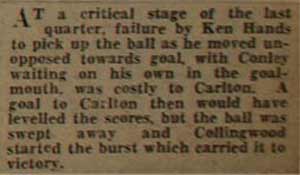 Unfortunately, the Blues were swamped with Lou Richards adding 3 last-quarter goals to his 2 earlier majors to emerge the match-winner.

Newspaper commentator Gerald Brosnan considered it the "match of the season".

Carlton were still atop the ladder, albeit only on percentage over Melbourne. Collingwood lay 1 game behind.