Despite being played in constant heavy rain on a cold Melbourne afternoon, this match was a skilful encounter between two of the form sides of the competition. And just like in Round 6, 1926, Carlton took on the ladder leaders and came away with the points. Beforehand, Collingwood and Geelong sat at the top of the table, with the Pies having a superior percentage. But the Blues would be up all day, and the Pies would not be able to take the game back. As a result, the Pies fell from 1st to 3rd, and the Blues maintained fourth place on the ladder. This competitiveness seemed a far cry from the struggles of season 1925.

After the game, two trams packed with supporters collided heavily at the corner of Lygon and Newry Streets. Many people were injured, and ambulances ferried more than forty to hospital.

At the end of this round Carlton were in 4th spot on the ladder with a percentage of 127.7.

The plans to knock-off the No.1 team were put in action on Thursday night, and the Blues carried it out to the letter.
Collingwood were unprepared, perhaps they were over confident, many of their players wore sleeveless jumpers, making taking a mark with a greasy ball very difficult. Only one Carlton player, Beasy, bared his arms, and he was one of the least effective Carlton players on the day. Footwear on such a muddy ground was a huge problem for the visitors, they were slipping over so much so that the Magpie boot-studder was kept busy at half time changing all the players' stops.
The crowd was kept waiting overtime by 15 minutes in the pouring rain for the third quarter to commence. The Collingwood players returned to the field in dribs and drabs. The crowd meanwhile, was screaming at the umpire to bounce the ball.
The Blues were the lighter team, but they skillfully handled the wet weather and out paced, and out played their opponents.

"In the days of old when Collingwood were a mighty power - and one can scarcely visualise the time when such was not the case - the Carlton team was built up on a scheme that was destined to break down Collingwood's famous system. Collingwood, as in the present day, favoured the short pass. Carlton's idea being dash, strength, and long kicking. Dash would prevent Collingwood having first use of the ball, and while there was just a little dwelling in the short passing method it would make their long exchanges and kicking a dreaded force. It was brains against brains a clash of styles - and history has proved that Carlton's was the winning and dominant one. Those glorious dashes and the coming through that thrilled the onlookers required a special brand of athlete, and when they were procured, with the men playing to orders, Carlton's fame spread thoughout the length and breadth of the land, for nothing could stand up against them.
Collingwood's system of short passing is pretty, though Carlton's old style - the winning style the world over - as a thrilling one, showing football at its best and brightest. And it is pleasing to record that the "old blues" are a gain a power in the football world. Their play is moulded on the lines of the past, though they are exceedingly fast and clever." ( "J. W" Australasian July 03 p34)
To read Jack Worrall's match report in full via Trove, click here> http://nla.gov.au/nla.news-article142159104 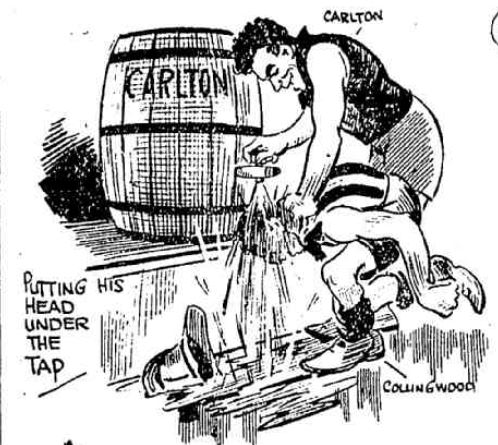