The Blues went down again in this game - by 6 goals – to ruin the celebration of Denis Zeunert's 100th match.
However, Collingwood's big win was marred when their star wingman Thorold Merrett suffered a broken leg in the first quarter. He was replaced by youngster Keith Burns, who then starred by kicking five goals for the match, including three in a dominant third quarter for the Magpies. Merrett’s injury ended his career, while the Blues now seemed headed for a tussle with Richmond over the wooden spoon.

Collingwood returned to the winning list with a terrific last quarter burst against Carlton that left the Blues floundering, and without any counter. The Magpies would have been in dire straits had they lost. Carlton has now lost four games in succession. The same few had to do the hard work for Carlton. Graham Donaldson was the only ruckman, Leo Brereton roved tirelessly, and Bruce Comben and Denis Zeunert were strong defenders. - Football Record. 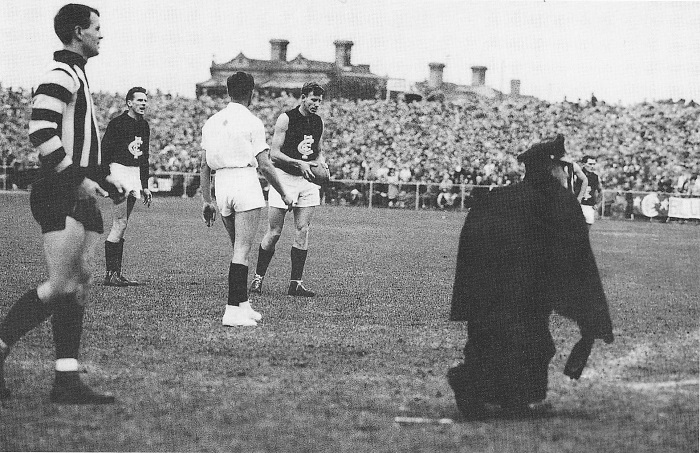 A policeman retrieves a beer bottle thrown from the crowd after Carlton's Graham Donaldson was awarded a free-kick deep in the Blues' forward line.
Barry Smith is possibly the Carlton player standing behind Donaldson.