Carlton lost to Melbourne by 51 points at the MCG. Ollie Grieve BOG despite the sizeable loss.

On a waterlogged MCG the Blues produced a brilliant second quarter outscoring the Redlegs 34-3 to take an eighteen point advantage into half-time. However that proved "the end of the penny-section".

Melbourne overwhelmed the Carlton side in the second half to record 12 goals 6 to 1 goal 3.

Ollie Grieve must have played an outstanding game to be named BOG in a side trounced by 51 points. Much of the afternoon he spent playing on Demon star Norm Smith, who was making his 200th league appearance. 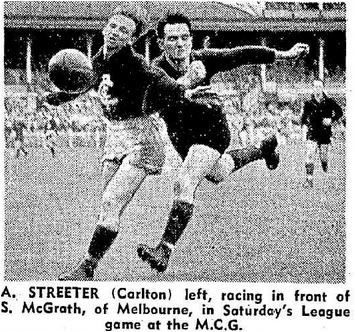