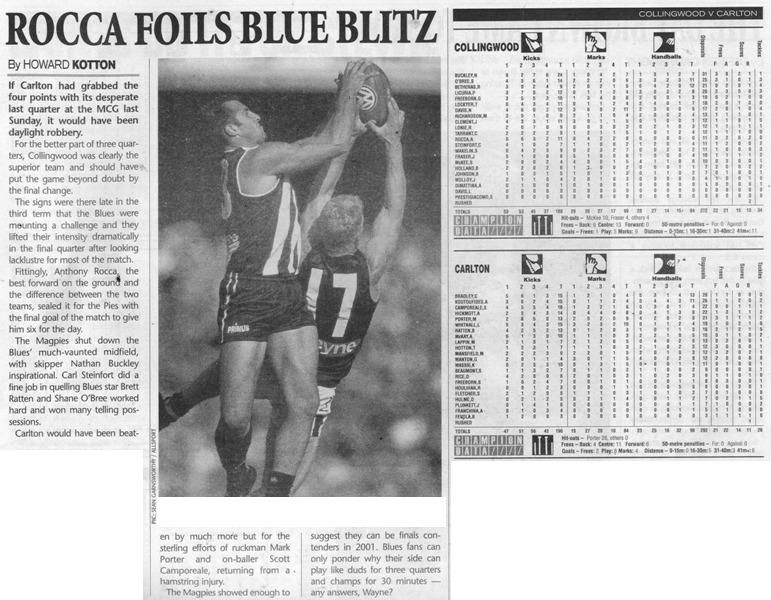 Click to expand
It was goal for goal in the first quarter. While Collingwood were the better side, inaccuracy kept Carlton within 6 points at quarter time. But a 5 goal to 2 second quarter would give the Magpies a 23 point lead at half time. They would increase their lead in the third quarter to 34 points, before the Blues responded with two late goals, to reduce the 3/4 time margin to 21 points. They would continue their momentum, kicking 4 more unanswered goals in the last quarter to grab the lead. However Collingwood fought back to kick 2 goals, which Carlton were unable to respond to and ran out 8 point winners.

While Collingwood were undoubtedly the better side on the day and deserved their win, Carlton were able to get into a position where they could have snatched victory but couldn't quite pull it off.

Mark Porter was judged Best on Ground and won the Alfred Deakin Medal, with 21 possessions, 9 emphatic marks, 26 hit outs, a goal and a hand in a few others. Anthony Koutoufides was important with 26 possessions and 2 vital goals. Craig Bradley with 28 possessions, Scott Camporeale and Adrian Hickmott with 22 were important in the midfield.

This loss put Carlton out of the 8.

About once every 100 days in the football season Anthony Rocca does something. Just one change in selection for the Maggies, ruckman Steven McKee in for midfielder Chad Rintoul, out with a broken foot. The Blues were able to recall experienced trio Scott Camporeale, Matthew Lappin and and Anthony Franchina, making way were kids Heath Culpitt, Simon Wiggins and Jordan Doering.

A hefty 73,572 packed into the 'G (less than Collingwood's games against Richmond or Essendon, incidentally) on a cool Sunday. Carlton lined up with the struggling Lance Whitnall in a back pocket on Josh Fraser while Koutoufides went to the focal point, accompanied by James Clement. Pie skipper Nathan Buckley had about five opponents throughout the day, Andrew McKay the longest-lasting. Fraser kicked the first goal for Collingwood from a mark, Koutoufides replied for Carlton courtesy a free-kick for holding. The Maggies managed the next when Blues skipper Craig Bradley soccered the ball straight to Pie Shane O'Bree, he calmly passed back to Nick Davis to boot the goal. 'Braddles' didn't have the best of days. Must be hard playing with that zimmer frame. With Buckley rampant and some Blue prime-movers, notably Brett Ratten, striving to get involved, the Pies skipped to a handy lead with goals from Bucks and Glenn Freeborn. The Bluies managed a late comeback in the term but the Pies went on to control the second stanza as Anthony Rocca emerged from the form cocoon. His first quarter had been as poor as his previous dozen, but in the second korter here Rocca hauled in 4 marks and booted 3 goals against Glen Manton. Chris Tarrant kicked one as well. Despite ruckman Mark Porter's winning form the Blues were being beaten midfield, Koutoufides and Andy McKay worked hard to counter the flow.

For the second half Whitnall was restored to the Blues forward line but the Magpies continued to control the contest. Rocca led and marked just outside 50m, went back and smashed a drop-punt home from inside the centre square. The Maggies led by 34 points at this stage and looked like winners. Whitnall booted his first goal shortly after, but Rocca had the answer for that one, too. Now the Bluebaggers got moving, thanks to Porter's tremendous efforts with assistance from Whitnall, Kouta and Ryan Houlihan coming off the bench. Before the final change McKay crept upfield for a goal, then Houlihan snaggled a sausage with his first kick of the afternoon. Houlihan bagged the first goal of the final stanza too, then fired visionary handballs for goals to Adrian Hickmott and Koutoufides. Suddenly the Bluies were just 3 points down. From a ball-up at their CHF Porter grabbed the pill and handballed to Whitnall, the burly carrot-head snapped Carlton into the lead. They'd scored six consecutive goals. Buckley, and some Blue mistakes, helped rally the Pies. Blue rover Darren Hulme kicked them forward but then turned to remonstrate with Brodie Holland. Free kick, the Pies went forward and Tarkyn Lockyer marked and punted the Pies back in front. Rocca marked again on the lead and shot from 30m out, but he produced one of those uncertain prods which hooked for a behind, Pies by 4 points. Soon enough Rocca had another chance thanks to a Bradley mistake, this time from further out and he slotted it comfortably. Carlton had some chances, Whitnall just failed to hold a diving mark 20m out dead in front, then shot an errant handpass between two team-mates. Ratten missed a shot and the siren sounded for the Magpie Army.

The Maggies won it midfield and once again it was the dynamic duo of Nathan Buckley (31 disposals with 24 kicks, 2 goals) and Shane O'Bree (25 touches) who did the setting-up. Anthony Rocca ended with 6 goals from 8 marks and 11 kicks in an overdue contribution. Their defensive efforts were good, Shane Wakelin at full-back on several opponents took 7 marks, Mark Richardson at CHB with 13 touches and a goal, Carl Steinfort's stopping effort on Brett Ratten. 'Rats' had 16 touches, very few for him, while Steinfort had 11 disposals. Glenn Freeborn (16 kicks, a goal) was handy and Paul Licuria (20 disposals) had the better of an out-of-sorts Matt Lappin. The Alfred Deakin Medal, awarded for the best footballing federalist Prime Minister, went to Carlton ruckman Mark Porter for his sterling day-long efforts. He had 21 disposals, took 9 marks and kicked a goal. Carlton could be quite good when Matt Allan returns. Anthony Koutoufides worked hard in attack and on the ball for 26 possessions and 2 goals, good efforts too came from Scott Camporeale (18 kicks, a goal) and Andy McKay (15 disposals, a goal). Half-forward Ryan Houlihan had just 8 disposals but kicked 2 goals, created two others and was instrumental in almost stealing it. Simon Beaumont did a good job on Magpie forward Chris Tarrant and Lance Whitnall showed some sort of form, taking 10 marks (5 at each end of the ground) and kicking 2 goals. Ratten also kicked 2 goals. Wayne Brittain said "Had we got up and won the points in the end, we probably would have stolen it from them. Our best form is just around the corner. We have got the ability to play at that level, we have just got to work a bit harder. I don't think we're working as hard as we did last year." Mick Malthouse saw it in dramatic terms. Before the game he'd challenged his players to "win a big game" and they responded. "We had to win today. This is it for us, there's no turning back. There is no comparison to last year, we are a totally different side, I think we are better, we are more mature than last year...it's all very well to have a process but at the end of the day (if we'd lost) we would have been 2-4 and licking our wounds saying 'Look how close we got'." - Dag's Footy Website.