Carlton would pull away from St.Kilda in the second half by kicking 14 goals to 4 in this well attended game out at ‘Arctic Park’. The Blues would amass a whopping 38 scoring shots to 23, a relatively common feature of the Blues at the time.

But perhaps the biggest event at this game was the Master, Greg Williams, racking up 45 possessions with his 2 goals. An amazing 27 handballs alone – imagine how excited Carlton fans would get if one of our current day younger players managed 27 possessions ! – gives an insight into how well a link man and creator “Diesel” truly was.

There was no surprise in the Brownlow votes, with 3 to Diesel, 2 to Stephen Silvagni and the 1-vote went to Mil Hanna with 26 possessions including 4 behinds.

An interesting post script to this game is the #37 for the Saints, Dean Rice who was shortly later to hurt his knee and be left to the side by the Saints. Ricey would become a Premiership player with the Blues within 2 years of this game.

At the time, the win moved us to 2 wins and a draw from 4 games, but with the bye, we remained out of the Top 6 (the finals at the time had room for 6 teams).

For a summary of Carlton's nineteenth 100 League games, click here. 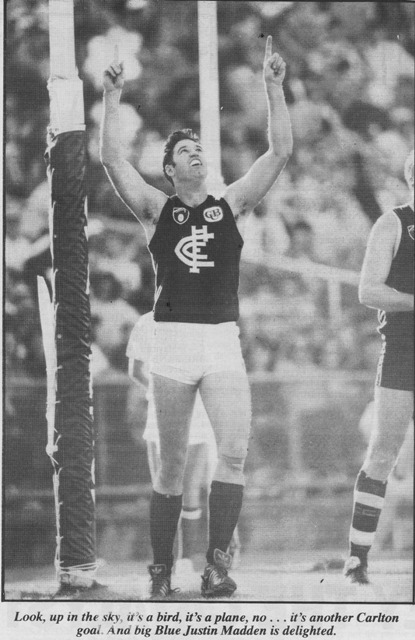