Carlton lost to Melbourne by 81 points at the MCG. The first time Carlton conceded 100 points. 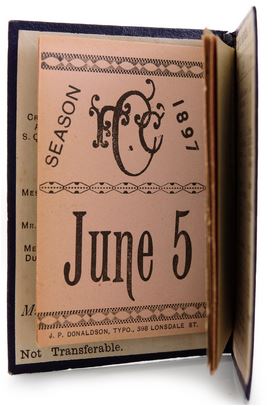 Melbourne scored the first century (100+ points in a game) in the League and won by 81 points. This remained Melbourne's greatest winning margin against Carlton until Round 6, 2004 when they won by 105 points. Brook Hannah was acting captain for Carlton in this game (according to the Age newspaper) instead of the appointed vice captain Ernie Walton. The Argus commenced their reporting of the game with this line; "In the many games that Carlton and Melbourne have played over the last 20 years, the strength of one side and the weakness of the other was never more farcibly shown".

During the match, Melbourne played good football and worked together as a team, while the Carlton side showed no unity whatsoever. The game opened brightly enough, with the Blues looking like they would make a contest for the first 10 minutes, but by the early stages of the last quarter Melbourne had scored 15 goals to none to make the game a rout.

Carlton scored three consolation goals towards the end through good passages of play. However Melbourne's forwards had been dominant, and the Blues simply had no answer.

This savage loss dropped Carlton to seventh place on the 8-team ladder, winless, and with a paltry percentage of 44.34. Only St Kilda was faring worse, with a percentage of 38.03.

Debut: Henry Crane (Malvern Juniors/Ballarat)
Last Game: Henry McPetrie and Joe Paton both played their last League game
Records: This was the first game played between these 2 teams in the VFL and the first in which Carlton conceded 100 points or more.

Brook Hannah, Ernie Walton & Jack Reekie were selected in a VFL team squad to play the Bendigo Association team on the following Wednesday June 09 on the Upper Reserve Bendigo.
Only Jack Reekie played in the match which the VFL won 14.14 - 9.4

Although this was the first VFL meeting between these clubs, Carlton and Melbourne had been playing each other since 1866* in the Challenge Cup era, and later in the VFA. They are the Blues' oldest rivals.

Records found so far - up until the end of 1896 - indicate that these two clubs had played each other 89 times, with the Blues winning 42, losing 26, and drawing 20. One match result at this stage is unknown. (See Pre VFL)
-*Pre 1866 details are incomplete.