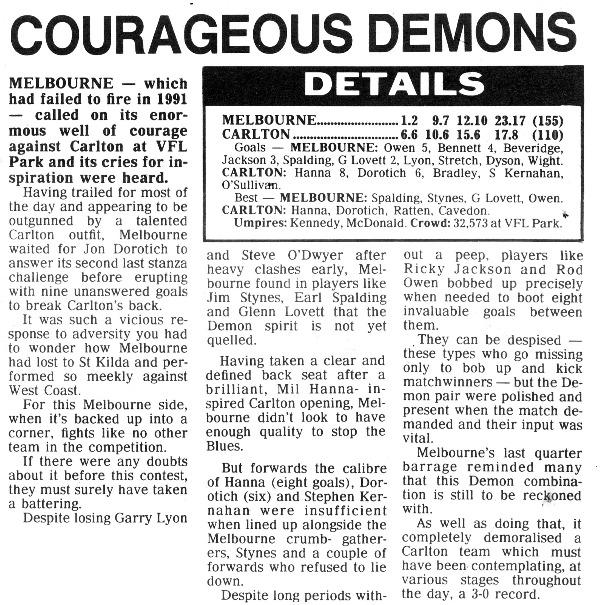 In this extraordinary match, Stephen Silvagni played the 100th game of his blossoming career (and was reported) whilst Mil Hanna and Jon Dorotich kicked 14 goals between them - yet Carlton was beaten by 45 points!

Comfortably in front at three-quarter time, the Blues fell in a heap when Melbourne began their revival, and the last 25 minutes of the game turned into a rout. Constantly in attack, the Demons piled on 11.7 to Carlton’s 2.2 before the final siren brought a merciful end to the contest. Hanna's eight majors equalled the club record for goals against Melbourne, previously shared by Horrie Clover (1920) and Paul Schmidt (1942).

Future Blue Earl Spalding was significant in Melbourne's barnstorming last quarter, impressing the Carlton match committee enough to recruit him at the end of that year, while Stephen Edgar polled the only Brownlow Medal vote of his short AFL career. It wasn't a memorable day either for Stephen Silvagni - he was reported for striking Demon Simon Eishold, and later suspended for one game.