Richmond beat the Blues by 15 points at the MCG, in Ang Christou's debut game.

The Blues lost this game after conceding a massive 9-goal last quarter to Richmond to end an unhappy year. David Cloke kicked eight for the Tigers in the final game of his distinguished career - most of them bounced 5 times before leg breaking through the goals, if memory serves!

The unhappiness spread throughout the list, with a number of AFL careers ending for the Blues.

On the positive side, Ang Christou wore guernsey number 56 and kicked a goal on debut. This is the highest number ever used by a Carlton player during a whole match with the seniors. (Number 60 has been used, but only when someone has had to replace a jumper during a game). 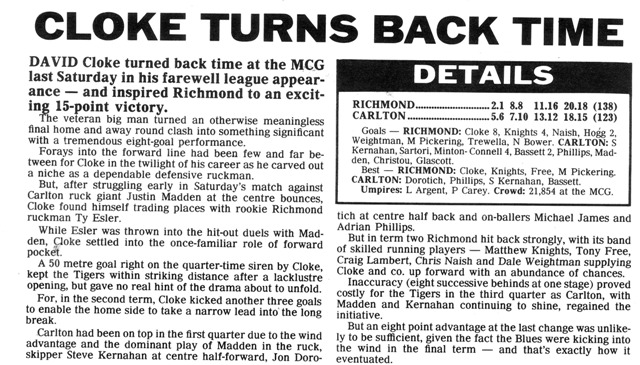