Carlton were destroyed by Hawthorn by 98 points - Princes Park.

Carlton's season of discontent continued with a smashing at the hands of the Hawks.

The powers that be at Carlton were already eyeing off recruits over summer, and it is interesting to note that 3 of the players Carlton gave up for Greg Williams would have a role to play in this game - Peter Sartori and Simon Minton-Connell kicking most of our goals, and Ashley Matthews playing his last game for the Blues.

The only positive one could take from the game was the memory of a Mil Hanna bomb. Early in the second quarter Mil launched a torpedo on the run from well inside the centre square that went through the goals almost post high at the scoreboard end. 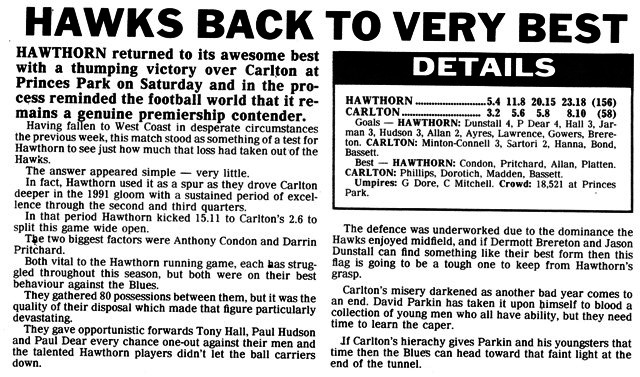 Last Game (Carlton): Ashley Matthews played his 9th and final game for the Blues before transferring to Fitzroy.
Score Records: This was Hawthorn's greatest winning margin over Carlton, until Round 12, 2007 when the Hawks defeated Carlton by 100 points