Port had first use of a stiff breeze and were 21 points up at the first change. By half time the Blues had levelled it up and were 2 points ahead. They kept the Power to just one goal while they had the breeze in the third and were a point ahead at 3/4 time, coming home with the wind. Carlton was 7 points up with 40 seconds to go, when a free kick for sheparding off the ball was paid to Port inside their 50 metre arc, when three Carlton players were along and marked the ball, the resulting kick was a goal. With just 20 seconds left to play Carlton looked set for the narrowest of victories. But Port won the ball out of the centre and a mark to Peter Burgoyne on the siren was followed up by a goal after the siren, costing Carlton the game. After 13 straight victories, they had now lost 3 in a row with the finals just 2 weeks away.

Scott Camporeale's 34 possessions were a clear highlight for Carlton, opposed to future Carlton midfielder Nick Stevens, who would both earn Brownlow votes. He had support from Simon Fletcher with 22 possessions and a goal, Brett Ratten with 20 possessions and 2 goals plus Andrew McKay with 21 off half-back. Ryan Houlihan followed up his previous round's Rising Star Nomination with another 20 possession game and 2 goals, including one where he picked the ball up and ran half the length of the ground. Interestingly, most of the goals were kicked by midfielders either on the ball or resting, with Simon Beaumont the only 'tall' cracking the majors, whilst Whitnall was goal-less. 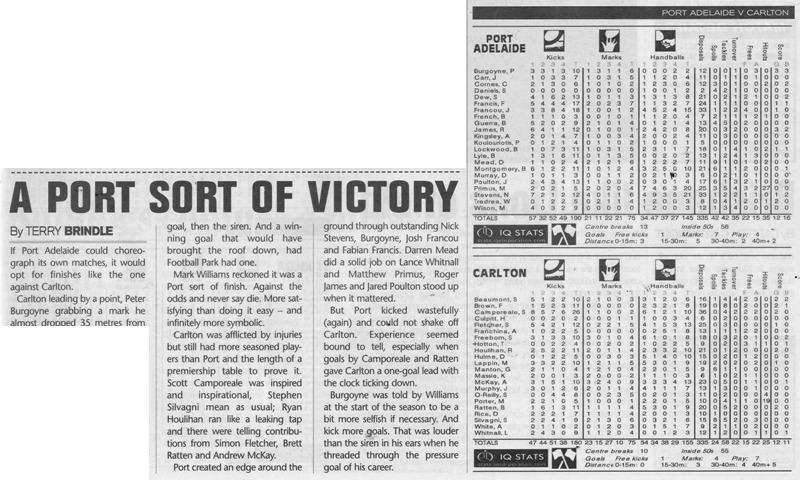 100th AFL Game: Matthew Lappin
Last Game: Stephen O'Reilly, Adam White
Returning from injury: Justin Murphy would play his first game since injuring his knee in the 1999 Grand Final. It would be his only game for the year and he would not play for Carlton again until 2002, after being traded to Geelong for the 2001 season and then traded back at the end of that year.
Interesting fact: Adam White would also play his only game for the year (as a late replacement for Hamill) but he would not play any more AFL games.
Interesting Fact: Almost twenty years later Carlton would again lose to Port Adelaide with a kick after the siren that was played on Round 7, 2020.