Carlton would comfortably win this game against cellar-dwellars Fitzroy at home. At the time, the Fitzroy Football Club was falling to its knees amid financial and player losses, and only the week before had been embarrassed by the Bombers by failing to score in a whole half (and then only scoring 1 goal in the third). It was a sad time for the Lions, and for football fans in general.

But they would come out and surprise the strong Carlton team in this game in a good opening quarter. It would take until the second quarter for the Blues to wake up, and then they would dominate the second half to take the game by 11 goals.

Newcomers Scott Camporeale and Matt Clape would again steal the show, with 25 possessions + 3 votes and 5 goals + 1 vote respectively. Our strong defence at the time, led by Stephen Silvagni, Peter Dean, Andrew McKay and Michael Sexton would rack up about 20 possessions each as they created a wall the Lions couldn’t cross. A mammoth 390 possessions tells the story of our game plan at the time and dominance in this game.

Also of note in this game was the emergence of Brad Pearce, who in his second season with the Blues started to make an impact – 2 goals in this game, and Matthew Allan our young ruck who was starting to take the mantle from Justin Madden. But the biggest emergence was that of Anthony Koutoufides who managed 29 stats in this game after last week’s 26. Kouta became a player before our eyes. 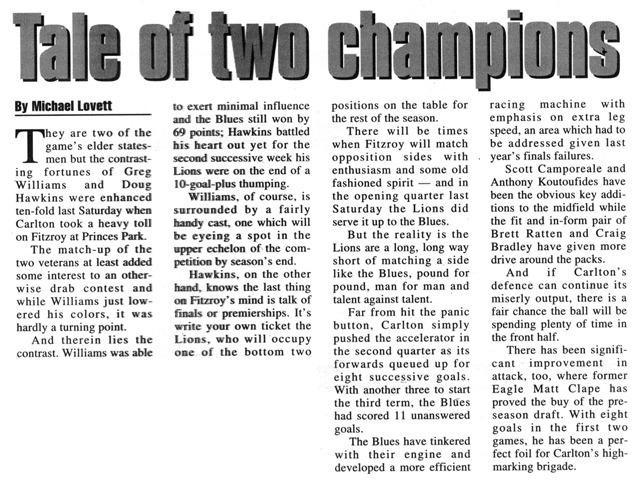