In Bruce Doull's 350th game, Carlton defeated Collingwood by 49 points at the MCG, and tipped the Pies out of the finals.

This was a typical Carlton-Collingwood clash, with plenty of highlights - particularly Bruce Doull's great achievement in becoming the first Blue to appear in 350 senior games, and Craig Bradley's five-bounce run along the outer wing, capped off by a brilliant long goal. 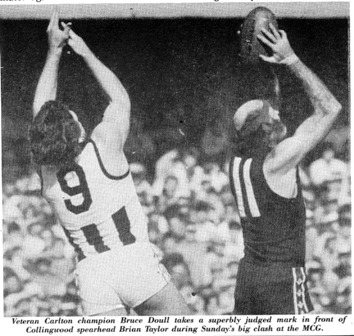 Aside from the long-standing enmity between the clubs, this was a vital match - particularly for Collingwood. With four rounds left in the season, Carlton was solid in third place, but the Maggies’ fifth position was under serious threat from Footscray and Fitzroy. The Pies were nervous, and it soon showed. In trying to knock the Blues off their game, some of the Collingwood players took their eyes off the ball, allowing their steadier opponents to skip away to a good lead of 22 points at the main break.

After that it was all Carlton, despite numerous incidents like Magpie Dennis Banks’ blatant round-arm strike from behind to David Rhys-Jones’ jaw – a blow that concussed ‘Hyphen,’ and left his team a man short for the last quarter and a half. Even so, the Blues still kicked seven goals to five in the last term, with defenders Peter Motley, the evergreen Doull, and Stephen Silvagni impassable. Carlton came out on top by 49 points, while Collingwood dropped out of the top five that afternoon and stayed there – eventually losing out on a place in the finals by 11 percentage points.

Peter Motley played his best game for Carlton when he was voted as best player on the ground. He provided a lot of drive from the defensive half for the Blues and set up many scoring opportunities for the Blues. Wayne Johnston in the centre also shone on the big-stage, which seems to be a common occurance for the "Dominator". The ever-green Bruce Doull was rock solid in defence as he not only shut out key Magpie forward Brian Taylor, but set up a lot of attacking moves for the Blues' forwards. - Inside Football Player of the Year.

Mark Maclure and Mick Gayfer escaped with reprimands after being reported for striking each other.


Blues happy with young SOS
Carlton must be delighted with the return to form of outstanding young player Stephen Silvagni. Steve took time to shake off a bout of hepatitis early in the year, but now he seems fully fit and right back in touch. He thrilled the huge MCG crowd in Sunday's match against Collingwood with his high-flying exploits and gave the Blues forward line a real boost. It's interesting to see him being used in attack at the moment by coach Robert Walls. Steve's played most of his senior football on the backline, but obviously has the ability to adapt to a position up the other end of the ground. Given dry conditions in the finals (which is normally the case) then Steve Silvagni could well be a match-winner for Carlton up forward. - Inside Football.

350 Games: Bruce Doull recorded his actual 350th game in this match, although it was celebrated a few weeks earlier. Sounds a little odd? If so, click HERE for more information.
50 Games: Peter Dean