Solidly ensconced in fifth place on the ladder and playing at home at the SCG, the Sydney Swans went into this Saturday afternoon match against Carlton as hot favourites – and only narrowly avoided an embarrassing defeat. The Blues led at half-time and were right in the contest, before a third-quarter lapse allowed the Swans to break away and hold off Carlton’s barn-storming finish. Sydney’s star forward Lance Franklin was the difference between the two sides. “Buddy” kicked four goals and posed a constant threat, whilst the Blues’ attack again lacked firepower and their big forwards were well-held.

Carlton made two changes to the team for this trip north, aiming to avoid a sixth successive loss by recalling Levi Casboult and Blaine Boekhorst in place of Kristian Jaksch and Jed Lamb. Sydney turned on a cool, sunny day with a blustery breeze favouring the southern end of the ground as Casboult and youngster Charlie Curnow went forward for the Blues. At the other end, Sam Rowe was given first crack at Franklin, while Sam Docherty took up his customary role as a loose man deep. 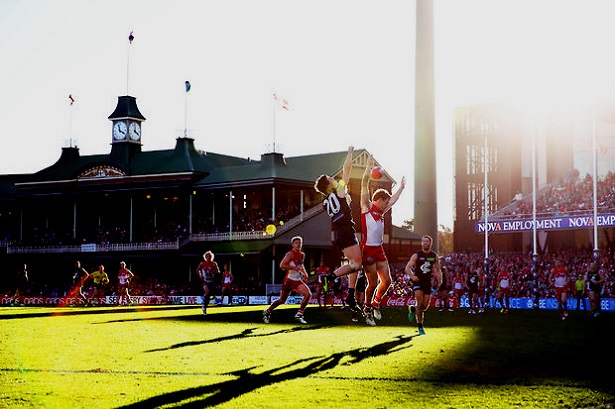 Carlton kicked five goals in a hard, even and entertaining first quarter, highlighted by Charlie Curnow’s strong mark and conversion from a tight angle, Liam Sumner’s brilliant soccer kick at full pace, and Ed Curnow’s opportunist snap from close in. The Blues led by 3 points at the first break, because they were disciplined in defence and tackling fiercely, but Franklin’s huge goal from outside the 50-metre arc right on the siren was ominous.

Bryce Gibbs, Kade Simpson, Matthew Kreuzer and Pat Cripps stood tall in the second term, hunting the ball relentlessly as Sydney’s midfielders met them head-on. Although a dropped mark gifted Franklin his second goal midway through the quarter, Rowe was sticking to his task and winning his share of contests. And when Boekhorst swooped on a loose ball and goaled in the shadows of half-time, Carlton led by 8 points with an upset brewing.

Sydney coach John Longmire blasted his team during the long break, demanding that they lift, and they did, dominating the first twenty minutes of the third quarter to kick four unanswered goals. Meanwhile, Charlie Curnow had hobbled off the ground with a twisted knee, and Sam Kerridge was struggling with a damaged shoulder. The Swans broke 20 points clear when Franklin booted his second major of the term, and it seemed that they were about to blow the match apart – until Jack Silvagni won a free-kick and goaled from 25 metres to give his team some hope. Right on the three-quarter time siren, Gibbs burst from a pack and kicked long into Carlton’s forward-50, where Casboult shook off his opponent to take the mark. When Levi kicked truly, the Blues were suddenly only seven points behind with a quarter to play.

Sydney swarmed forward to kick the first goal of a final term, and the Blues replied almost immediately through Ed Curnow. From then on, the match turned into a battle of defences and tough, individual contests. For the second week in a row, Carlton could have snatched a last-gasp victory, but when Dylan Buckley’s snap-shot missed with less than a minute to play, the Swans were home by 6 points.

In another honourable loss, the Blues could have asked nothing more of the team’s leaders. Playing just his 39th career game, Patrick Cripps amazed again with 32 disposals (22 contested) 13 tackles and 11 clearances. Bryce Gibbs collected 31 possessions (15 contested) 11 tackles and 7 clearances, while Ed Curnow’s non-stop running brought him 28 disposals (16 contested) 8 clearances and two goals. Kade Simpson and Sam Docherty continued their outstanding individual seasons, and Matthew Kreuzer worked tirelessly around the packs. The Blues remained 14th on the ladder after this round, with a trip to Tasmania for a daunting assignment against reigning premiers Hawthorn next up.