It took Hawthorn star Jason Dunstall's 100th goal of the season to pip a determined Blues' lineup. Carlton, with the likes of Simon Verbeek (28 disposals, 11 marks), Paul Meldrum (30 disposals) and Glenn Hawker (29 disposals) prominent - looked set to upset the ladder leader, only for Dunstall's late goal that gave the Hawks their slender victory.

Steve Da Rui was reported, but later cleared of a charge of unduly rough play (it must have been duly rough play). The previous week Da Rui had had Melbourne's Greg Healy stretchered off after he had run through the Demon captain with a thunderous, legitimate hip and shoulder. Being hit this way by Da Rui would have been akin to head-butting a runaway steamtrain! 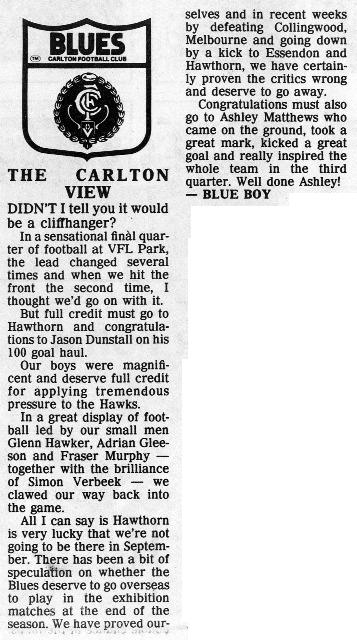 
Note : McKenzie replaced Robertson in the selected side.