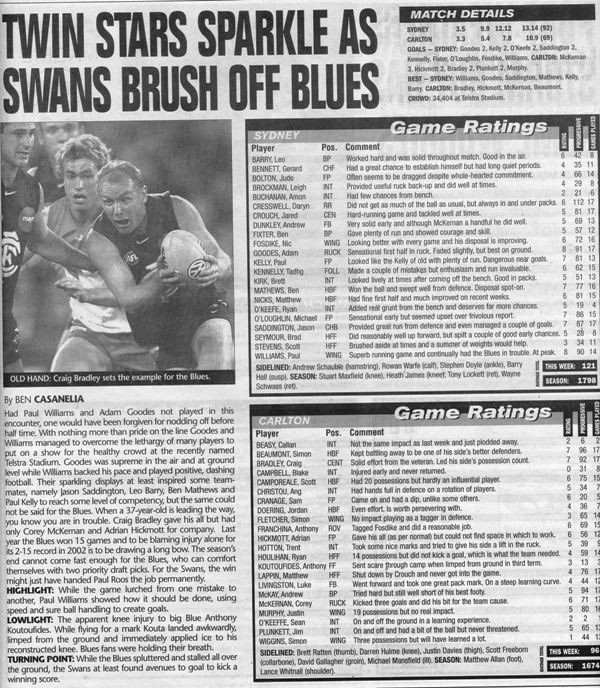 Click to expand
The Blues started well against the Swans, but as seemed to be the case for much of the 2002 season the opposition was able to get a good run in a quarter (in this case being the 2nd) with 6 goals to 2.

Corey McKernan with 3 goals and Adrian Hickmott with 2 were good up forward, whilst Craig Bradley was good in the midfield with 24 possessions and 2 goals but, overall, it was a fairly uninspiring performance by Carlton. It seemed assured that the Blues would be receiving their first wooden spoon if they could not win a few games by the end of the year.

Anthony Koutoufides' comeback from a knee reconstruction suffered a setback and he would not play again that year. It was a hard game to watch from the stands - the Swans had our measure, Kouta tried valiantly to run around with a mattress brace on his knee yet still hurt himself, and it was apparent to this Victorian sheltered from footy in Sydney that the 2002 Wooden Spoon was most likely to come our way.


Note: * Late change Cranage for Mansfield
~Fevola would not play again in 2002, despite the club having that many injuries that almost anyone who was fit had to be selected. His career seemed over at that point but was later saved by Denis Pagan's decision to give him a second chance.