Ladder-leaders Fremantle were too good for Carlton, winning by 42 points in late rain at Subiaco Oval.

As expected, the Fremantle Dockers were far too good for Carlton on this Saturday afternoon at Subiaco, although even the Blues’ harshest critics had to concede that they went down swinging with a plucky effort for three quarters. A vital set-shot goal by Tom Bell goal right on the three-quarter time siren cut his team’s deficit to 21 points, before a heavy rain squall enveloped the ground, and the physically-superior Dockers pulled away to win by double that margin.

Already hamstrung by a long list of injured players, Carlton flew to Western Australia for this assignment against the league leaders further weakened by the unavailability of Bryce Gibbs and Dennis Armfield. A third change to the team comprehensively beaten by Richmond in round 15 saw ruckman Cameron Wood given a much-needed rest after his whole-hearted efforts throughout the season to date. Chosen as replacements were the two Sams; Rowe and Docherty, plus teenage debutant Bradley Walsh, who continued a Carlton tradition and was named as the Blues’ substitute.

From the opening bounce, Carlton couldn’t match Fremantle’s giant ruckman Aaron Sandilands. However, some astute midfield match-ups and strong tackling was rewarded by the first two goals of the match to Troy Menzel and Zach Tuohy – the latter after some slick passing by Chris Yarran and Nick Holman. The Blues jumped out to lead by 13 points after four minutes of play, before Fremantle settled into their rhythm and took a three-goal lead into quarter-time.

The second term was highlighted by three excellent Carlton majors to Jason Tutt, Simon White and Sam Docherty. In something of a surprise, White had been given a run-with role on the Dockers’ midfield star Nathan Fyffe, and was carrying out his assignment to the letter. His goal at the five-minute mark of the term gave the Blues impetus, and at the long break, the Dockers advantage had been trimmed to 15 points. However, the same season-long blights on Carlton’s game – costly turnovers and erratic disposal – had also reappeared, to frustrate coach John Barker and fans alike. 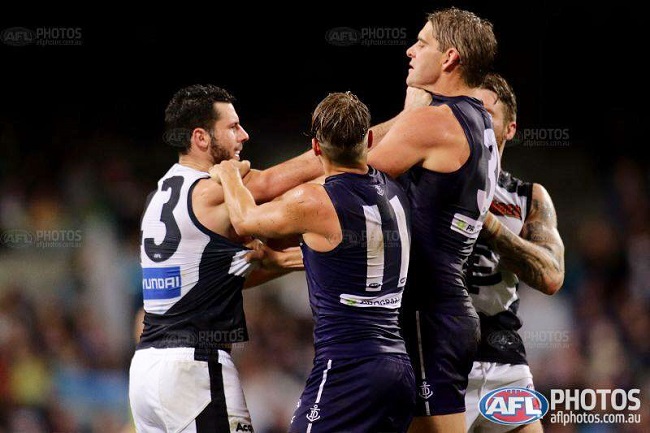 Barker wasn’t the only unhappy coach, and after a tongue-lashing by their mentor Ross Lyon, the Dockers were hard at the contest from the opening bounce of the third term. They goaled within two minutes of play restarting, and for a moment, it seemed the Blues might buckle. The fact that they didn’t was primarily due to the resolute efforts of captain Marc Murphy, Ed Curnow, Matthew Kreuzer, Sam Docherty and Tom Bell. The latter’s two late goals - the first on the run, after a classic handball from Curnow, and the second from a mark at 35 metres, right on the siren – kept Carlton well and truly in the game, at least until the heavy rain squalls swept over the ground during the three-quarter time break.

Sandilands dominance, plus the Dockers’ skill advantage in difficult conditions, saw the Blues kept scoreless in the final quarter. Freo kicked 2.9 - mostly from set shots - and the brutal truth is that the final margin should have been even greater. However, although the gulf in size, skill and experience between these two sides – one a genuine flag contender, the other a candidate for the wooden spoon - was immense, the Blues gave little away in tenacity and intensity. Amid this train-wreck of a season, it was an effort that a least provided a glimmer of hope.

Life and times of Denis Pagan.jpg