At the end of an emotional week for the Carlton Football Club – a week that saw the passing of 1947 Premiership player Allan Greenshields, the much-anticipated debut of 18 year-old third-generation Blue Jack Silvagni, and game number 200 for Andrew Walker – Carlton fell to traditional rivals Collingwood by 12 points after an even struggle on this Saturday night at the MCG. In a contest high in intensity but riddled with skill errors and a lack of initiative from both teams, Collingwood took an 18-point lead into the final quarter and held the Blues at bay to avenge their defeat earlier in the season. Adding to Carlton’s woes, promising defender Ciaran Byrne suffered a season-ending knee injury.

At team selection on the previous Thursday night, Carlton included Jack Silvagni at the expense of Jason Tutt as the Blues looked to halt their recent slide. Since their shock victory over Geelong in round 10, Carlton had won just one game, and were staring at a third straight loss. Meanwhile, Australia was voting in the 2016 Federal Election, and a little more than an hour after the local polling booths closed, a somewhat disappointing crowd of just over 56,000 funnelled into the MCG on a clear, calm evening. Despite the excitement generated by Silvagni’s debut and Walker’s milestone match, the poor numbers reflected the fortunes of these two once-mighty teams, now mired in mediocrity and parked 13th and 14th on the ladder. 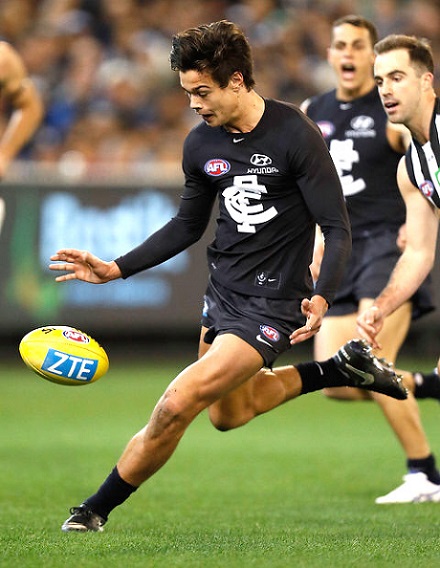 Carlton lined up in similar fashion to previous weeks, with Sam Rowe and Jake Weitering in the key defensive posts, and Walker, Levi Casboult and Andrew Phillips as the tall targets up forward. In the middle, Ed Curnow picked up Magpie playmaker Adam Treloar, while Matthew Kreuzer led Carlton’s rucks. In other influential moves, Collingwood captain Scott Pendlebury wasn’t closely marked, but Bryce Gibbs was. Collingwood cleared the ball from the opening bounce and should have goaled straight away through their tall young forward Darcy Moore, who missed from a sharp angle. Three minutes in, Dale Thomas won possession and sent a pass to Silvagni, who marked at half-forward, steadied, and picked out Jed Lamb in the forward pocket. When Lamb threaded the ball through, Blues fans were ecstatic - until Collingwood struck back and the teams traded goals through to quarter-time, with the Magpies ahead by two points.

The second quarter was a dour contest, marked by mistakes all round. For much of the term, Collingwood seemed more composed around the clearances, but Kade Simpson’s inspirational play across half-back blunted many of their forward thrusts. Around the packs, while Curnow continued to keep Treloar under tight control, Collingwood’s Levi Greenwood was doing the same to Bryce Gibbs, allowing Pendlebury the space and time to constantly drive his team forward. Even so, at half-time there was nothing in it on the scoreboard, with Collingwood clinging to a five-point advantage.

As they had threatened to do throughout the match, the Magpies exerted their authority in the third quarter when Pendlebury and ruckman Brodie Grundy got on top around the clearances. Some infuriating umpiring and wayward kicking for goal sapped the resolve of both sides, but Collingwood persisted for longer to kick 2.3 while keeping Carlton to just two behinds. In such a low-scoring match, their 3-goal lead with a quarter to play was invaluable.

Hampered by what looked like a damaged ankle, Weitering was thrown forward at the start of the last term and the move could have paid off immediately, when Jake passed to Lamb just outside the 50-metre arc. Lamb gave the ball a roost, only to see it drift out of bounds. When play restarted, Ciaran Byrne kicked long from half-back, only to be hit hard and late by his opponent Travis Varcoe. Off balance, “Casey’s” right knee buckled as he landed, and the popular young Irishman’s season was prematurely ended. Dale Thomas evened up for Carlton shortly afterwards by crashing through Magpie James Aish on centre-wing, but it was all a little too late. Earlier, Silvagni had thrilled the Carlton masses again with a big contested grab, and he should have kicked his first career goal when he marked in the right forward pocket with ten minutes left. Although Jack was only 15 metres out, he fired a pass backwards to Gibbs, who was directly in front - but his shot veered through for a point. Carlton had the best of the final term 2.1 to 1.1, without ever looking like winners, and the 12-point final margin flattered the Blues.

So, after surprising and delighting supporters with six wins in the first eleven rounds of 2016, Carlton was now 6-8, and sliding back toward the mediocrity predicted for the club pre-season. Collingwood had learnt from the lessons provided by Carlton’s recent opponents, and beaten the Blues at their own game. Carlton had more clearances, more tackles, more contested possessions and more effective hit-outs than Collingwood, but our midfield was monstered and our attack was impotent.

As for the positives, Kade Simpson remained in contention for another John Nicholls Medal with his 28 disposals and 6 marks under constant pressure. Ed Curnow worked tirelessly to limit a dangerous opponent, racking up 23 possessions and 12 tackles. Bryce Gibbs persisted to collect 22 possessions, 5 marks and 2 goals, while Jack Silvagni made an impressive start to his career with 15 disposals, 6 marks and four inside-50 entries.