Going in favourites, the Blues were never in the hunt and were humbled by St Kilda at Docklands

Heading into this Sunday afternoon match against St Kilda at Docklands, Carlton sat tenth on the ladder, having chalked up four wins from their previous five matches. The Blues were heavily favoured to beat the inconsistent Saints, but this time St Kilda’s coaching panel came up with a high-energy game plan that overwhelmed the Blues’ defence, and they ran out winners by more than five goals.

On the occasion of hard-working midfielder Ed Curnow’s 100th senior match, Carlton made one change to the side that had comfortably beaten Brisbane on the same turf in round 11, recalling lively small forward Liam Sumner at the expense of Nick Graham. A surprisingly-large crowd that would eventually swell to more than 47,000 was still queued at the entrance gates at 1.10 pm, when the ball was bounced to start proceedings on a fine spring day under the open roof. 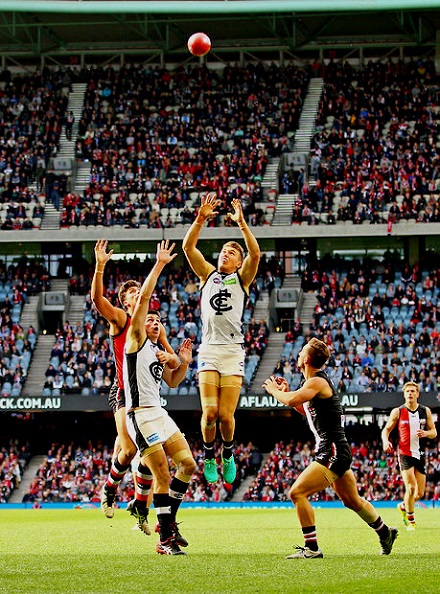 Intensity and fierce tackling from both sides produced a stalemate for the first 15 minutes, before Bryce Gibbs speared a sharp handpass to Andrew Walker for the game’s first major. The Saints immediately replied, and with their full-forward Tim Membury creating headaches with his pace and aerial skills, they added another three goals before the quarter-time siren to lead by eight points.

Early in the second quarter, an opponent’s shin crashed into Curnow’s head. While he was off the field being tested for concussion, St Kilda kicked three goals in five minutes and their confidence visibly lifted. Curnow returned before half-time and finished the match, although without the usual tenacious edge to his play. At the long break, St Kilda were 19 points up and travelling like winners, with Carlton’s midfield leaders Gibbs and Patrick Cripps under a tight rein. Saint Tom Hickey was on top in the ruck, while Membury (who finished the game with 5 goals) continued to hand out a harsh but necessary lesson to Jake Weitering.

Carlton needed a big third term to kick-start a revival, but it was St Kilda who stamped their authority on the contest by slamming through 6.5 to 3.1 and stretching their advantage to 41 points. Although Kade Simpson, Dale Thomas, Sam Docherty and Matthew Wright – who kicked two of Carlton’s three majors for the quarter - continued battling hard for the Blues, overall the team looked slow and lacking in energy. Dozens of Carlton fans were filing through the stadium exits by the start of the final quarter, and they missed seeing their team salvage some pride by winning the term 4.3 to 3.0 to cut St Kilda’s final victory margin to 32 points.

Although this defeat was a reality check, Carlton had reached the mid-point of the season with a 6 wins and 6 losses – a far better result than anyone had anticipated. Ahead was a much-needed bye for the Blues, then a succession of tough encounters before an eagerly-anticipated rematch against St Kilda in round 20.

In : Liam Sumner
Out : Nick Graham

100 Games : Ed Curnow
Last game (Career): Daniel Gorringe
Interesting Fact: Another two Blues kicked multiple goals in this game, with Levi Casboult's three and Matthew Wright's two majors taking them both to 11 for the season to date, in a season where we would have a low leading goal-kicker