Carlton kept its finals chances alive with a hard won 28 point victory over a spirited Fitzroy, who surprised everyone except themselves with their clever play and determination. The Blues won courtesy of a ten goal second term, but for the rest of the game were made to work hard for the win over the much improved Maroons.

A strenuous training session featuring match play and running followed Tuesday night’s light training. Almost a full muster was available, including Jim Park whose hand was coming on well. Charlie Davey had recovered from his appendix attack but was likely to be another week away. Eric Huxtable was expected to miss two weeks with his gashed thigh (caused by a boot stop in last week’s game) and Jack Carney was ruled with strained ligaments. Mick Price was omitted, and into the team came Frank Anderson (back from suspension), Jack Wrout (on the strength of his five goal best on ground performance in the seconds last week) and Norm Cashin (promoted after only two seconds games). George Collard was named 19th man.To get Wrout, Carlton had sent a youngster in Alan Crawford to North, an exchange which ended up being win-win. The committee announced that it was holding a reunion for former players during the half time interval on Saturday and welcomed all past players to attend.

One late change was made by Carlton. Keith Dunn (bruised shoulder) was ruled not fit and Charlie Davey came into the side. Rain had kept the crowd down. Fitzroy made a strong opening, kicking to the stand end with the assistance of a light breeze. For the first ten minutes of the game, they attacked relentlessly, putting Carlton’s defence under pressure early. A behind and a goal were the result, but most importantly, their strong defence was keeping Carlton from going forward and they were on top in the centre. It was scrambling play, but the Maroons adapted to the conditions well, kicking off the ground where necessary and handling the greasy ball better. Another Fitzroy thrust was repelled by Anderson, Francis and Clarke but a second goal came as a result of a good drive around the wing. Carlton got better as the term went on; the Blue’s first score coming after McIntyre and Cooper defended well and kicked to Crisp. He passed to Clarke for a behind. Cooper was again involved, getting the ball to Mutimer, but the chance was missed. Shea snagged a behind before Vallence kicked Carton’s first goal, despite strong Maroon defence. It was a typically rugged game with Umpire Hawkins letting play roll on, despite several incidents going un-penalised. Gill saved well and sent the ball forward to where Kuhlken, Cooper, Crisp and Mutimer were involved in Wrout snapping his first goal for the Blues. Green went down heavily in a clash and was hobbling as a result. Just before the bell, Crisp got the ball to an unguarded Clarke, who kicked an easy goal and Wrout followed up shortly after with a behind to give Carlton a nine point lead at the first change.

Still on top in the centre, Fitzroy made several early attacks, but strong Carlton defence repelled well. Carlton went forward through Vallence and Coope,r who passed neatly to Clarke for a goal. Within a minute, he had another, and Carlton lit up as they pounded the forward line. They were now playing some wonderful football, using system and direct attacks down the centre. Francis and Mutimer combined and kicked to Vallence, who marked and scored Carlton’s sixth goal. When Kuhlken added another soon after, the Maroons looked rattled. Carlton was now in complete control, with fine teamwork, skilful passing and supremacy in the marking contests. Smart play from Green, still limping, found Cooper who raced away to Crisp, who snapped a fine goal. Cooper broke the run of five straight goals when his long punt went through for a behind. The umpire was still letting things go and breaches of the rules were either going unnoticed or being ignored. Fitzroy rallied and goaled from a rare (and doubtful) free. Carlton responded well, with Gilby stopping an attack and passing to Shea. He found Davey who kicked Carlton’s ninth goal. Fitzroy’s early dash had gone and they were now fumbling badly as Carlton kept the pressure up. Another Carlton goal came from Shea, who burst through a pack and fired, with the ball bouncing through the posts. Some brilliant play from Crisp and Cashin resulted in Wrout goaling, which was quite poetic as the game looked like it might become a rout at this stage. Two well-earned goals from the Maroons kept them in the contest, but Crisp replied immediately with his second goal. Vallence kicked Carlton’s tenth for the term, with an amazing snap over his shoulder which was applauded by all. Some rugged play from Fitzroy enabled a desperate late rally, with three goals coming from their best play for the quarter. The bell ended an astonishing quarter. Carlton had kicked ten goals and Fitzroy six, for a total of 16-2 for the term, leaving the Blues up by 35 points at half time. Francis, Anderson, Shea, Crisp and Gilby were the Blues best for the half.

Green, with a suspected broken toe, was replaced by Collard during the break. As with the opening quarter, Fitzroy made all the attacks early, kicking 2-2 in the first five minutes and edging closer. They looked a different team to that of the second quarter, displaying great teamwork and still playing with pace from the centre. Carlton defenders were under the pump as another attack by the Maroons brought a goal from a snap 50 yards out. It was a vigorous, gruelling game; both sides giving their all in tough clashes. Fitzroy’s defence was on top and any Carlton thrusts were quickly turned away. Finally, Vallence kicked the Blues’ only goal for the quarter, marking well out and kicking perfectly. A poster by Fitzroy left them 19 points down. Play seesawed back and forwards for a period, as both defences were playing well. A late behind left the Blues with a 20 point lead going into the last term.

Carlton defenders were again kept busy for the first five minutes of the quarter, with aggressive and determined play from the Maroons going unrewarded. Despite strong Fitzroy defence, Vallence gained a free and goaled, giving the Blues some breathing space. When Bullen surged through a pack soon after, Carlton led by 34 points at the 15 minute mark. The fire had gone out of the game, but not the skill or desire, as two tired sides kept plugging away. Two goals to Fitzroy made the difference only 22 points with ten minutes to play. Sensing the danger, Carlton fought strongly against a spirited Fitzroy. The Maroons attacked again and what appeared to be a definite goal was disallowed by the goal umpire. Sweeping the ball forward, Wrout found Cooper unguarded and that player goaled to seal the game. Fitzroy replied within a minute with a goal but it was likely too late. When Cooper again found himself unattended, Davey passed to him and he registered Carlton’s 18th goal. Fitzroy attacked until the bell, but poor kicking cost them any chance. In the end, a determined Carlton defeated a valiant Fitzroy by 28 points in a fine display.

This win left the Blues in fifth spot with seven wins and five losses, two games out of the Four below Melbourne and one game clear of St Kilda in sixth place.

Jim Francis was judged the best and fairest Carlton player in the match and was awarded a special trophy.

At half time the committee entertained 100 past players dating back to season 1878.

"Yesterday the Carlton officials, players and supporters took part in a hamper picnic at Park Orchards.
A programme of sports, goal kicking competitions, &c, was held, and in the evening dancing was indulged in. About 100 persons made the trip, and an enjoyable time was spent."
(Age Monday July 27 p4) 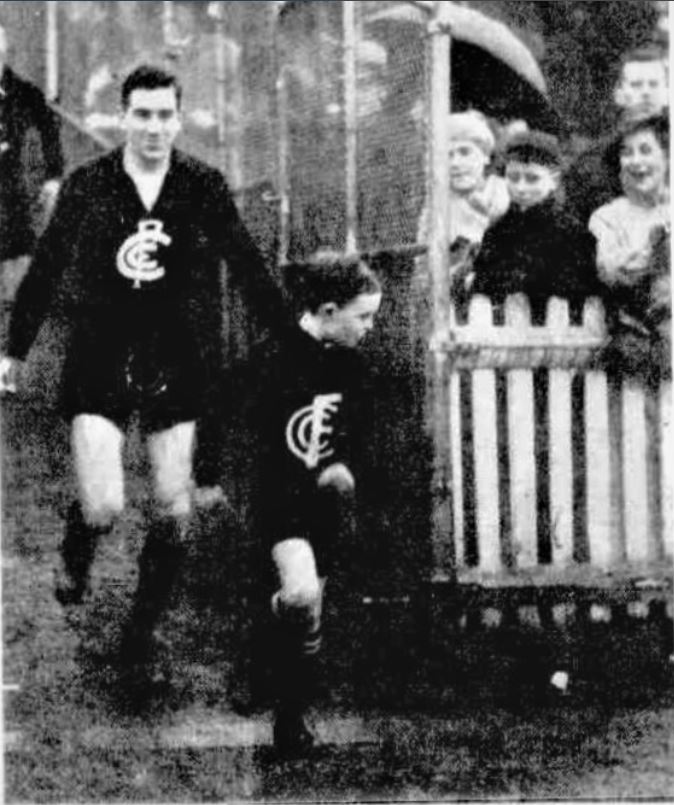