Carlton suffered its third defeat in four games against a strong South Melbourne side which had slightly the better of the Blues all day. South’s pace, strong play and aerial supremacy were the keys to their seven point win, which left Carlton with a 6-5 record after eleven games, with only seven rounds remaining.

The emphasis was on tactics during a light training session on the Thursday night. Jack Carney (cold) and Warren (knee) did not train, but Gordon Mackie was classed as fit. Jim Park’s hand was progressing slowly and Frank Anderson’s suspension still had a week to run. The announced side contained three changes. George Collard, Horrie Bullen and Wally Mutimer (as 19th man) were included at the expense of Clem Neeson, Rod McLean and Ted Pollock.

The players and committee had dinner in the city after the training and the players later held their own meeting back at the club. Great enthusiasm and confidence of victory was expressed by all.
Charlie Davey (appendicitis) was a late withdrawal from the side and Mutimer started on the ground. Mick Price was brought in as 19th man. South Melbourne, with a strong wind, opened vigorously with two behinds coming early. The ground was heavy and both sides were mishandling and fumbling, making play scrambly. Carlton’s first score came after Kuhlken and Green brought the ball around the wing to Mutimer, but his snap went for a behind. Carlton were the steadier side early, with better ground play. A mistake by a South defender let Crisp in for Carlton’s first goal, with a lovely drop kick from half forward. Green, playing well, drove forward to Vallence who marked, but kicked wide for a behind. Again Green featured, marking brilliantly and passing to Kuhlken, who combined with Mutimer and Cooper for a beautiful pass to Vallence, who took a great mark. His long punt sailed through for Carlton’s second goal. The Bloods settled and scored two quick goals; the first after a brilliant mark, and the second from a free. Huxtable collided with the fence and was clearly troubled by his leg from then on. Another great mark brought South’s third goal. The game was rugged and fierce, ex Blue Mocha Johnson taking every opportunity to dish out to his former teammates, who were giving back as good as what they got. A South attack was repelled well, with Mutimer, Shea and Crisp combining perfectly to send the Blues forward. A clever mark was taken by Vallence, who goaled with a long punt from a tight angle. Two doubtful frees to South raised the ire of Carlton fans, especially when the second of these gave South its fourth goal and a ten point lead at the first break.

Drizzling rain began as the quarter opened, and the wind had freshened. A great drive around the half forward flank by Carney resulted in a nice mark to Bullen. He kicked to Vallence, who took another fine mark and kicked his third goal. South answered, thrusting down the centre for a mark and goal. Carlton were starting to get on top, playing methodical, unstylish football. Francis and Dunn worked the ball forward to Mutimer, but only a behind resulted. Another chance from Vallence, after hard, strong work, brought the same result. But the kick-in went out of bounds and Carlton rebounded well, to where Clarke earnt a free kick, his goal capping off some fine work by the Blues. Again, the Bloods were able to answer, with a quick goal. Carlton attacked again, but an easy chance was wasted by Mutimer, who kicked a behind after marking six feet out from goal. Dunn, playing well, got the ball to Vallence who kicked Carlton’s sixth goal to level the scores. It was a great game, with all the trimmings: pace, high marks, long kicks, fierce contests and great ground play. South had begun to get on top in the ruck, so Kuhlken was sent in for Carlton, which levelled the duels out. Clarke kicked Carlton’s next goal, after getting the ball 50 yards out and kicking accurately. Again, South answered and the scores were once again level. Carlton’s break came when Huxtable kicked to Cooper, who kicked to Vallence. His towering mark and soaring punt put the Blues up by six points, and when he repeated the passage shortly after, with another mark and goal, Carlton had a handy lead. A late goal to South made the Blues lead six points at half time. Late in the term, the game had become very fiery and looked several times as if it were about to get out of control. Shea, Clarke, Dunn, Green and Vallence were prominent players to the break.

Huxtable, with a leg injury, was replaced by Price at the break. South Melbourne made a strong opening; a good mark on the wing the catalyst for the equalising goal in the first minute. Carlton counter-attacked through Shea, Cooper and Mutimer, but Collard could manage only a behind. Foolish handball undid a promising attack by the Blues, before Vallence again hit the post from a shot at goal. Another behind gave Carlton a three point lead. Both sides were producing good football up to this stage, but South leapt ahead with a paralysing burst of goals. First, a 70 yard kick brought their tenth goal, then a nice pass produced another. A poor kick out from defence by Gill gave another chance and a South forward evaded Hale and Gilby for the twelfth goal. Then, a lucky kick off the ground went through for another and Carlton seemed mesmerised by the electrifying play. It took Shea, playing well in the centre, to break the spell, combining with Francis and Green to forward the ball to Vallance, who marked close in for Carlton’s tenth goal. The game was still fiery and Johnson, using his weight freely, decked Gill in one particularly rough passage. South’s pace, their bustling ground play and supremacy in the air were responsible for their sudden lead and two more goals before the bell sounded gave them a 27 point lead going into the final term.

South Melbourne replaced their injured ruckman at three quarter time. Behinds to both sides commenced the quarter, before brilliant play from Carney sent the ball to Crisp. He found Clarke, who marked right on the goal line and goaled. Gill, unfazed and playing well, stopped two South attacks and the ball ended up with Crisp, who brought the play around the wing to Cooper. He passed to Clarke who goaled again, from a snap, to edge the Blues closer. It was desperate, strenuous football, sending the spectators into spasms of excitement. Spiteful incidents were also creeping in, marring an otherwise great game. The wind had freshened and Cooper, Shea, Crisp and Clarke had all risen to the challenge. Vallence was copping a lot of off play attention and was floored twice, but answered in the best way after a defensive error gave him a mark and his eighth goal. With 15 minutes of play remaining, Carlton were finishing brilliantly, causing South to make several changes. They went forward twice, their first shot going out, but the next went through for a goal and a handy buffer of 15 points. Carlton players were throwing themselves into the fray, but several puzzling umpiring decisions made it hard for the Blues. Carlton got to seven points, after Bullen coolly burst through a pack and snapped the 14th goal with four minutes left to play. Gill stopped another South attack and Dunn kicked into attack, but South’s defence held. Hale was penalised for holding the ball in another questionable decision and South gained a breather. But Crisp marked the kick and found Carney on the scoreboard wing as the bell rang to end a great, but ultimately disappointing game. Those last four minutes had produced no scores but both sides showed heroic play in a thrilling finish.

Carlton held a picnic for committee, players and wives at Mornington on the Sunday after the game. Horrie Clover, in street clothes, won the kicking competition with a 68 yard punt and Wally Mutimer and Jack Carney won the wheelbarrow race!

At the end of this round Carlton were in 5th spot on the ladder with a percentage of 125.0. 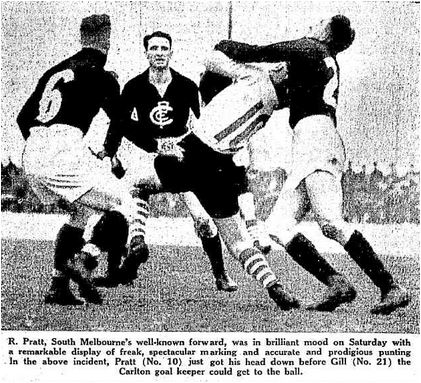