Carlton demolished a weak Fitzroy team by 81 points at Princes Park. Right from the opening bounce, the Blues ruled in all areas of the game. Holding the Maroons scoreless in the second quarter and kicking an eight goal final term were just two of the highlights of a dominant Carlton display.

Carlton had almost an embarrassment of riches at Thursday night’s training. Only Frank Gill (gastric influenza) and Ron Cooper (suspended) were unavailable and all other players were on the track. Keith Shea and Eric Huxtable had returned from State duties and were right to play, and Mocha Johnson had served his ten week suspension. Those three players were included in the side to play Fitzroy, leaving Jack Cooper, Norm Le Brun and Ray Quinn as the unlucky trio to miss. Bernie Treweek was made 19th man.

Despite the glorious weather, the ground was still heavy from the recent rains. This made play rugged and scrambling early on, but the Blues were revelling in it and were the better side. Davey and Pollock were again doing great work in ruck and Davey’s direct kicking provided several early attacks. From one, Clarke cleverly played the ball to Hale, who kicked the first goal. Davey again attacked and passed to Dunn, who quickly sent the ball to Vallence for the second goal. The Maroons were finding the pace and weight of Carlton a big handicap. They were also making the error of not talking, leading to players competing against each other for the ball, giving Carlton’s defenders easy pickings. Carlton’s third goal came after Crisp and Clarke, both scouting cleverly, forward to Crisp who goaled on the run. Then soon after, Crisp, Green and Hale combined and sent the ball to the goal area, from where Vallence scored an easy goal after a Maroon defender misjudged the flight of the ball. Those first four goals had come in just the first ten minutes. Not until the 20 minute mark did the first Fitzroy goal come, after the Carlton defence momentarily relaxed and allowed a smart goal. Fitzroy, now attacking well, hit the post from an unlucky shot, but atoned shortly after with their second goal to make the difference thirteen points at quarter time.

Carlton commenced attacking by bringing the ball around the outer wing. Johnson, loose from his man, picked up and drove beautifully to Hale who kicked the Blues’ fifth goal. Fitzroy’s defences stopped another attack but the pressure applied by Carlton was enormous. Green, Turner and Shea were constantly feeding the forward line but the Maroons were holding for now. Every time Fitzroy went into their forward half, either Gilby, Park or Mackie was in their way frustrating their attempts. Shea, relieving well, sent Carlton forward in the first of a number of spectacular drives. Green helped Davey to Carlton’s second goal for the term and a minute later, Johnson, with a beautiful kick, scored his first goal. Fitzroy had wilted under the constant barrage and Johnson tore through again to kick the ninth goal with a magnificent drop kick. The Blues were dominant all over, particularly in the centre and in the ruck. Carlton was also using the tactic of making Vallence the dummy full forward – leading out and leaving Johnston, on the half forward line, space to be a target for the forward thrusts. The half time bell rang with Fitzroy scoreless for the quarter and trailing Carlton by 41 points. Green, Davey, Gilby, Shea and Hale were very good players in a powerful first half. The game had been tough, with Fitzroy players simply not strong enough to match their opponents physically in the heavy, scrambling conditions.

Fitzroy came out a better side after the break. Playing with more cohesion and teamwork, they pressed home several attacks early, but Anderson, Huxtable, Gilby and Park kept them at bay. Another attack gave the Maroons their third goal. Carlton now set up a series of attacks, with Johnson and Pollock both missing shots to score only behinds. Crisp and Turner gave Dunn a chance but he missed an easy shot. Despite Fitzroy’s better play, Carlton kept attacking, when Turner, from the wing, passed to Hale. He had a shot at the goal, where De Luca wisely stayed down from a soaring pack and booted goal nine. The Blues had now become overconfident and some undisciplined, selfish play came into their game with unnecessary handball, silly short passing and lax attention to their opponents. This let the Maroons, playing well out of the centre, score two goals from some fine play. Back on track quickly, the Blues scored two late goals to Johnson and Clarke to put the lead at 48 points at the last change. It had been an inaccurate quarter; Carlton kicking three goals nine.

Powerful ruck play from Davey and Pollock set the tone of Carlton’s last quarter. Playing around the wing, Clarke, Hale and Crisp engaged in a zigzag series of passes forward, which resulted in Johnson kicking at goal, with Dunn completing the good play with a snapped goal. Then, some good backing up created a loose man, enabling a dash out of defence which gave Shea the chance to kick his first goal. Fitzroy responded with a goal. They attacked again but their forwards were all out of position. A mistimed kick luckily brought up their seventh goal. Now it was Carlton’s turn and a dazzling display of passing between Turner, Shea, Hale and De Luca set up goals to Davey, Johnson and De Luca. The Maroons gamely persisted and goaled with a good snap. With the result beyond doubt, the game had lost some of its interest, but Carlton, still brilliant everywhere, went forward around the wing through Turner and Hale for Vallence to kick the 17th goal. Johnson added two more late in the term to complete a dazzling win over a demoralised opponent by 81 points.

At the end of this round Carlton were in 3rd spot on the ladder with a percentage of 138.1.

" 'Mocha' Johnson, Carlton's vigorous follower, made an auspicious reappearance against Fitzroy. His six goals were the result of clever play and fine kicking. Crisp, Gilby, Clarke, and Turner played effective football all day, Crisp's clever turning being a feature.
Fresh from interstate football games, Huxtable and Shea were in sparkling form for the Blues. Huxtable's dashing performance was one of his best, while Shea was in perfect fettle. Shea baffles opponents with a clever right-arm hook in carrying the ball away. Being a left foot kick, he moves mystify and he manages to balance and kick on the swerve away."
(Sporting Globe July 10 p10) 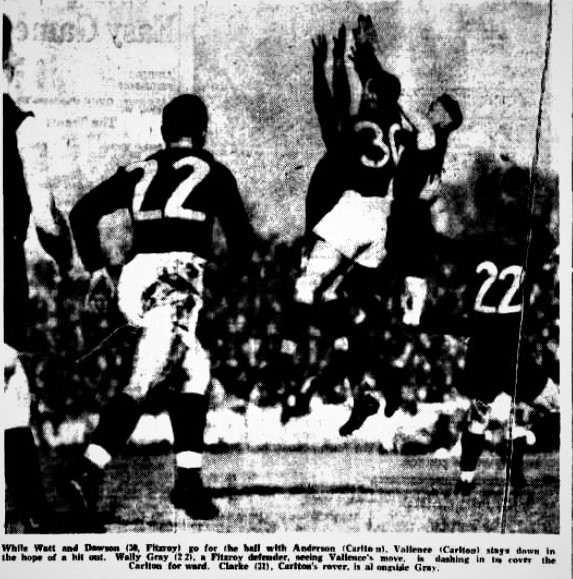 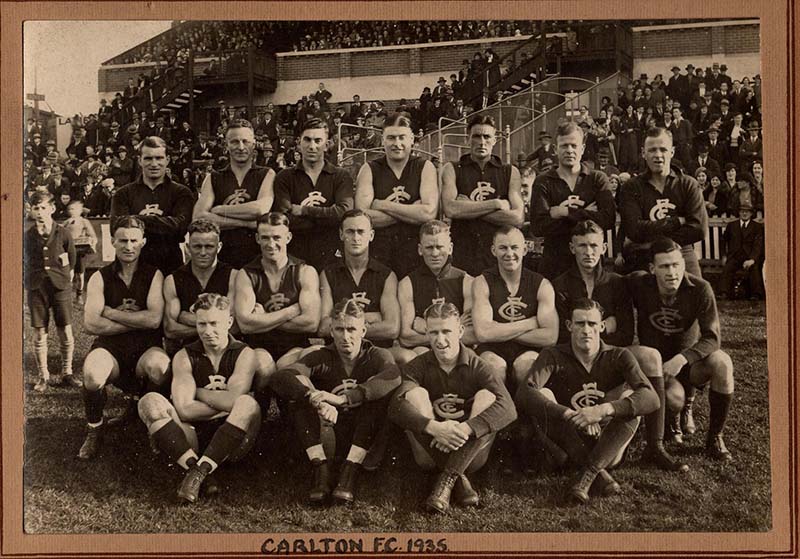 Believed to be the Rnd 11 team.
Both Frank Gill and Ron Cooper played in the only other game that Bernie Treweek played at Princes Park which was Rnd 9, 1935, they are missing here.
Possibly Treweek (middle row far right), he only played in 4 games this year (6 game Carlton career). His final game for the Blues would be next week at Geelong.
Bernie would go to Fitzroy in 1937 furthering his career by another 57 games and being selected for State representation.