Carlton lost to Fremantle by 28 points - Subiaco. Ratten played his final game for the Blues.

The match was tight early but the Dockers slowly took control. The Blues fought back in the third quarter, kicking the first 3 goals and reducing the margin to 21 points but could get no closer. They managed to stay in touch for the remainder of the match, only going down by 28 points. Carlton had no answer for Medhust, who kicked 7 goals despite 4 different opponents.

Simon Fletcher was Carlton's leading disposal winner with 26, although he would not have played had it not been for Camporeale's late withdrawal. Anthony Koutoufides had 24. Jarrad Waite had 21 and kicked 2 goals and would earn a Rising Star nomination. Brendan Fevola kicked 5 goals.

Captain Brett Ratten would end up playing his 255th and last game, after getting driven into the ground in a tackle, damaging his shoulder. Andrew McKay would take over as captain for the remainder of the season.

Last game: Brett Ratten
Rising Star Nominee: Jarrad Waite
Odd fact: Bret Thornton would kick his first AFL goal. He would have to wait over 5 years for his next goal at senior level! 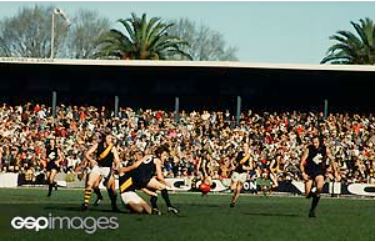