The Blues welcomed six new Bluebaggers to the guernsey for this opening match of 1914; Brown (Ballarat), Daykin (Bendigo), Harrison (Cobram), Keily (Brighton), Leehane (Charlton) and Willis (Brunswick) were all introduced to our line-up, and a frustrating draw with the Magpies ensued. Carlton's atrocious kicking for goal during the first three quarters kept Collingwood in the hunt, and although we finally found the goals in the last term, Collingwood held on to split the points. 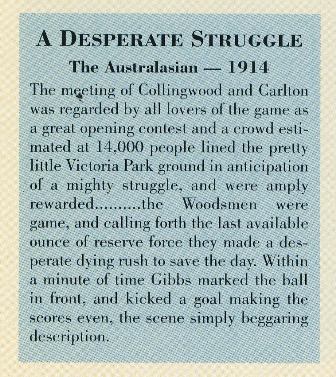 "Harrison is a young player who should develop into a top-notcher if handled discreetly. Hardly necessary to say he will receive correct tuition at Carlton.
Valentine, who is already playing fast and clever football, received a nasty knock during the third quarter at Victoria Park. 'Vally' was rarely in it after that."
(Sporting Judge May 02 p4)
Valentine completed the game and only "came to" unaware of what had happened on the field later that evening after being treated by club doctor Dr. E. A. Strahan.
At the end of this round Carlton were in 7th spot on the ladder with a percentage of 100.0.

Interesting Fact: This was the second time that Carlton has used numbers 1 to 10 in the same senior side, with the first time was in the Semi final, 1911 (the first time numbers were used in a match by the League in Victoria) and in this game is also the current record of numbers 1 to 15 being used. (Not bad our of eighteen players)
1914 | Round 2