With our previous season's top goal-kicker; Tom Carroll, in good form, the Blues started the season with this emphatic win over Fitzroy at the Brunswick St. oval.

A dominant second quarter where the Blues outscored the Lions by 40 points set up a match winning lead.
"Tall follower Maurie Sankey was brilliant in the air for Carlton, and his good work was capped off by the grass-cutting passes of rover Bruce Williams. The Blues had a "find" in Leitchville recruit Greg Hardie, who filled the second roving berth with distinction and scored three goals.
At the spearhead, Tom Carroll, marking and leading well, found fine first match form. He kicked four of Carlton's seven goals in the second term. With the rucks and attack and a dominant back line, the Blues had put the "writing on the wall" by posting a 49 point lead at half time.
An angry third-term clash, which followed after Hardie, of Carlton, had been knocked down when marking near goal, was the turning point in Fitzroy's form.
Stung into action, the Lions slammed on three quick goals - two from rover John Bahen - to cut the Blues lead." (Age April 22)
In the final term Fitzroy inspired by it's captain Kevin Murray out scored the Blues 4.5 - 1.1; despite this revival Carlton ran out winners by 23 points. 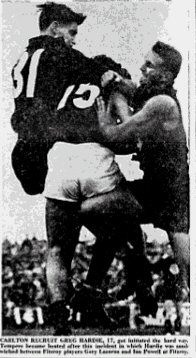 "Carlton recruit Greg Hardie, 17, got initiated the hard way. Tempers became heated after this incident in which Hardie was sandwiched between Fitzroy players Gary Lazarus and Ian Powell at Fitzroy." (Age photo.)