Carlton were outplayed by a slick Tiger outfit for three quarters, but staged a spirited revival in the last term - kicking 4.5 to one solitary behind - and almost snatched a remarkable victory. This was the 49th meeting between these two great rivals at Princes Park, and the first to finish all square.
In the last quarter Graham Donaldson marked the ball near the goal square, played on and kicked a goal. Umpire Mance recalled Donaldson and made him kick again, this time he missed an easy goal.

Richmond surprised 1959 finalists, Carlton, by forcing them to a draw. It was the first drawn game played between these two clubs. - Football Record.

J.Chick (torn thigh muscle) replaced by B.Arch in selected side 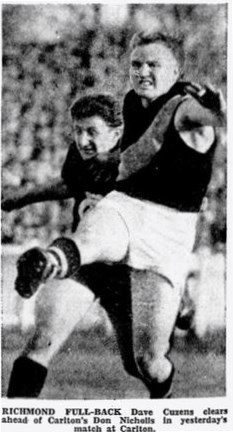