Carlton lost to Richmond by 9 points at Princes Park as 'Mickey' Crisp played his debut game for the Blues.

Carlton gave up a 6 goal lead at the first change to the Tigers, who kicked 12 goals to our 7 in the second half to snatch the game in what must have been a thrilling last quarter with 12 goals scored. 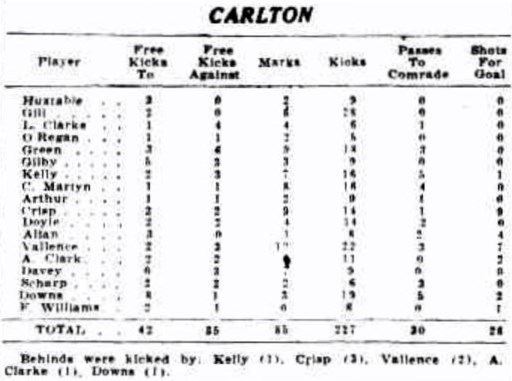 "Melbourne's latest B class station - 3KZ - has secured exclusive broadcasting rights at the Collingwood, Carlton and Fitzroy grounds, and is finalising arrangements with other League grounds.
Saturday's match between Carlton and Richmond, at Carlton oval, will be described by Mr. E. L. Dahlberg." (Age May 01 p5)

Radio football broadcasts were first conducted in the late 1920's on 3LO or 3AR (now ABC radio) with commentary from former Carlton champion Rod McGregor.
As with the introduction of TV in the mid 50's the League was very wary of of this new form of media and actively discouraged it. They were concerned that live broadcasts would encourage patrons to stay at home and listen-in.
A few years later in 1934, KZ would even construct a very precarious looking 60 foot (18.2 meters) tower outside the ground, behind South Melbourne's Lake Oval end goals for their intrepid football commentators to climb.
There is an image of this tower in the 1934 Image Gallery. https://www.blueseum.org/tiki-browse_gallery.php?galleryId=1461

Early broadcaster Norman Banks who joined KZ in early July, said he called his first match in 1931, "perched on a ladder and craning his neck to watch the gameplay through the tiny window of an old dressing room."
"At Princes Park he resorted to broadcasting from a plank protruding from the window of the ladies toilet, until the VFL relented to the rising tide and welcomed radio in."
(halloffame.melbournepressclub.com)

The newspaper Labor Call, May 14 (p8), has an article on the forthcoming "Radio Show 1931" exhibition to be held in the Melbourne Town Hall.
http://nla.gov.au/nla.news-article249979317
Many demonstrations including short-wave radio and early forms of television were shown, as well as old radio sets dating from 1900. Unlike today, nearly 100% of the exhibits were Australian made.

At the Town Hall, 3KZ attempted to break the world record by broadcasting continually for 207 hours. (The then record was 100 hours by a station in Mexico) Carlton's Round 3, 1931 match against Essendon on Saturday May 16 was part of this record attempt.197 hours was recorded due to a pole which was felled in a wind squall during the broadcast and interupted the power supply.