In a huge upset, Carlton lost to University by 15 points at Princes Park.

Before the match the football used in the 1908 Grand Final was present to Carlton captain Fred Elliott. The ball was suitably mounted and had an engraved silver plate containing the match details.
The Carlton monogramme appeared on the guernsey for the first time.

In one of the biggest upsets in the early years of the Victorian Football League, Carlton – the dominant club in the competition, and Premiers for the previous three seasons – was roundly beaten by University in the opening round of 1909. Bound by a strict amateur code, the Students were beginning just their second season of League football. Carlton on the other hand, was riding a wave of unprecedented success.

But ructions had surfaced at Princes Park, where some prominent members of the team were agitating for an increase in their “expense payments,” arguing that as they provided the entertainment (and that the game had never been more popular) they deserved a greater return. Coach Jack Worrall did not agree, and the dispute dragged on until the eve of the new season. Some players took the drastic step of refusing to play, and when the 1909 fixtures began, the Navy Blues were a much-depleted team. However, University was forced into numerous changes too. Five of their better players were unavailable, and those drafted in did all that was asked of them.

The story of the first half was Carton’s woeful inaccuracy around the goals. Fumbling and indecisive, they rushed their kicks at goal and did not manage a 6-pointer until the third quarter. The Students didn’t fare that well either, but their one goal lead at the main break was a fair reflection of both sides’ efforts.

George Topping eventually goaled for Carlton in the third term. He and Vin Gardiner were the only Blues to trouble the scorers, and Carlton’s match total of 3.14 (32) fell 15 points short of University’s 6.11 (47).

After the game, Carlton President Mr John Urquhart gave a gracious speech in which he made no excuses for his team, and praised the endeavour of every player in University colours. Perhaps equally as remarkable, University were on top of the VFL ladder after this round, while Carlton sat last.

The Argus newspaper's match report mentions that University fielded a weak team and had to find five replacements from their seconds, and that some Carlton players were standing out "because 'expenses' were not, in their opinion, sufficiently liberal."

At the end of this round Carlton were in last spot on the ladder with a percentage of 68.1. 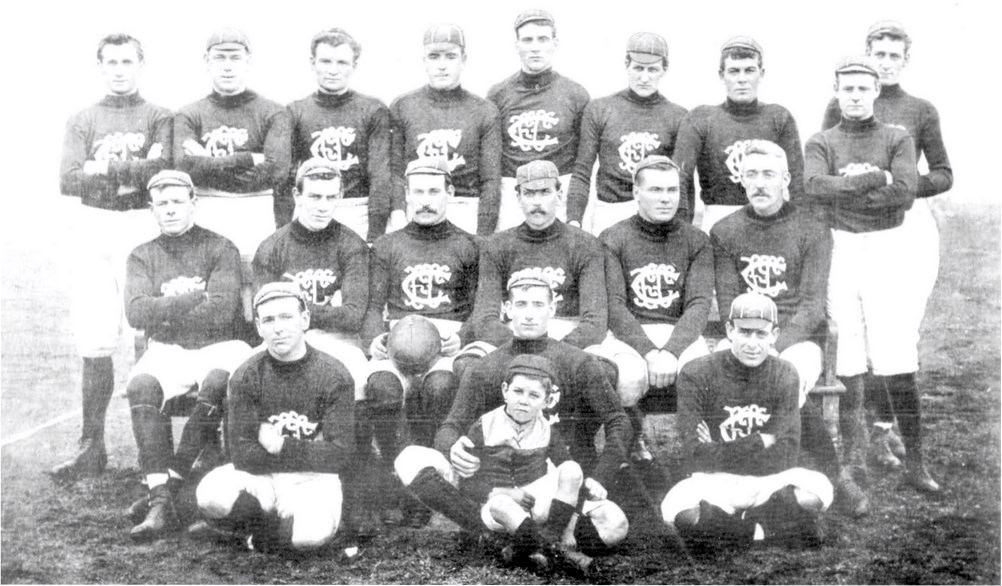 The famous Carlton monogramme makes it's debut.
Back L-R: Rod McGregor, Arthur Ford, George S. Johnson, Andy Pattison, Jim Marchbank, Alex Barmingham, Doug Gillespie, Vin Gardiner, Les Beck (at rear).
Centre: W/(G?) Stewart, Alex Lang, Fred Elliott (Capt), Fred Jinks (V.C.), Norman Clark, Frank Caine.
Front: George Renwick, Dick Harris, George Topping.
:The mascot (possibly Samuel Grimes*) is wearing the now superseded canvas and chamois lace-up guernsey. Although some individual players would continue to wear it to at least the end of the 1918 season. Most of the above players are wearing either a VFL Premiership, or a Carlton cap. Fred Jinks' cap has what looks like a "P" on the peak. Some players are photographed wearing the cap during the game. Most likely they are not VFL Premiership caps, why would the three first gamers be wearing them in the team photo?
.* There is an image of Samuel Grimes wearing his Carlton gear in the 1909 image gallery
:: 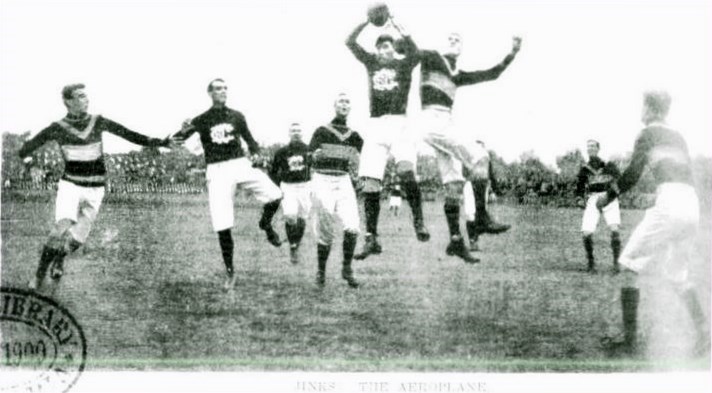 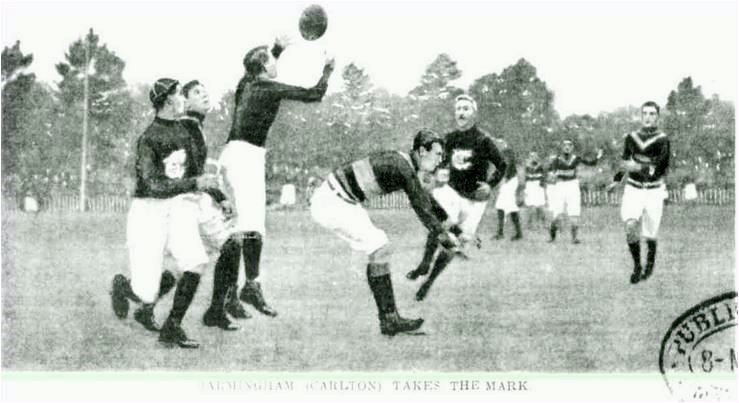 Alex Barmingham marking. On the right, Frank 'Silver' Caine (grey hair)
Note: University is wearing a "one off" clash jumper. A broad blue band has been added around the waist. (footyjumpers.com)

Debut: Alex Barningham, George Renwick, George Stewart
Score Records: This remains University's only win against Carlton, with the Blues registering their lowest-ever score against the Students. It is also, of course, University's greatest winning margin over Carlton.