In a solid start to the new season, Carlton defeated St Kilda by 26 points at Princes Park.

In a game notable for the first appearance of former Carlton star Mick Grace in opposition colours, Carlton embarked on the defence of their Premiership at Princes Park against St Kilda. An integral member of the Blues’ first two flag sides, Grace had switched clubs during the off-season for reasons that were never absolutely clear, making his debut for the Saints just a dozen weeks before his 34th birthday.

On this blustery Saturday afternoon, a fresh breeze was blowing straight down the ground to the Lygon St goals, so both teams were keen to win the toss. In his first match as official captain of his club, ‘Pompey’ Elliott called correctly and his men immediately pressed their advantage. But St Kilda packed their defence, and at quarter time Carlton’s score of 2.5 to the Saints’ 1.0 was well short of expectations.

However, determined resistance against the breeze in the second term limited the damage, and at half-time the Blues led by a very slender two points. Fears that the wind would ease during the long break proved groundless, and the home side attacked incessantly during the third quarter, adding 4.7 (thanks to 3 goals from George Topping) while keeping the visitors scoreless. At the last change of ends, the difference between the two teams had blown out to 33 points – although the breeze was still strong and early-season legs were feeling the pinch.

Carlton coach Jack Worrall instructed his ruckmen; George Johnson and Charlie Hammond, to stay behind the centreline throughout the final quarter, and both took telling marks as the Blues' defence stood firm. Although the ball rarely travelled forward for the home side, the Saints’ attack too, was repeatedly blunted. The visitors managed only 1.1 to be beaten by 26 points when the final bell rang.

Elusive forward George Topping was a star for the Blues, making the most of his limited opportunities to kick five of Carlton’s six goals in a low scoring, but quite intense contest. In other matches, Richmond celebrated their entry into the League with a solid win over Melbourne, while fellow newcomers University were well-beaten by Essendon.

After this round Carlton were third on the ladder, with a percentage of 218.2. 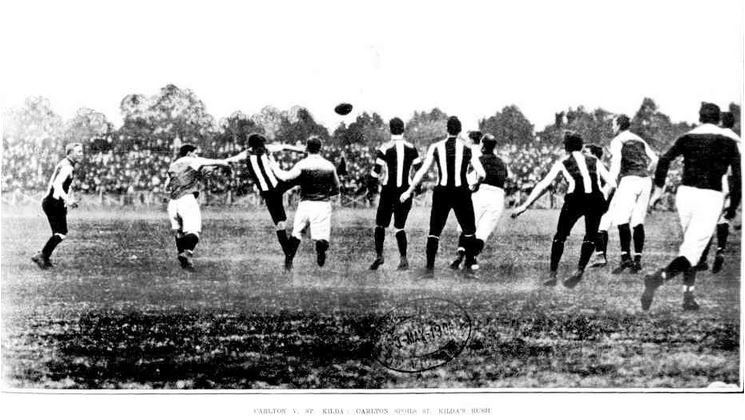