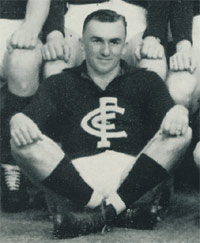 An honest and popular wingman who was drawn to Carlton while serving as an aircraft mechanic with the RAAF in World War II, Ron ‘Ripper ‘ Hines is remembered as one of two Blues who suffered the anguish of being dropped from the team prior to the infamous 1945 ‘Bloodbath’ Grand Final. The other player to miss out was fellow wingman Fred Fitzgibbon, who was suspended for four weeks by the VFL Tribunal after Carlton’s sensational victory over Collingwood in the previous week’s Preliminary Final.

Born in Ballarat, but living in Melbourne when war was declared, Hines enlisted for service with the RAAF in 1942. While training at various establishments around Melbourne - including Point Cook and Laverton - Ron played as often as possible with his home team - Coburg District - as well as with the Air Force in inter-service matches.

In 1943, he found his way to Princes Park, and was given his first opportunity at senior level in a vital game against Essendon at Windy Hill in round 14. Wearing guernsey number 11, Hines started on a wing (alongside Bob Chitty, in the centre) as Carlton won a tense, dour struggle by 3 points. His second game was that year’s first Semi Final against Fitzroy, which ended in a 51-point hiding for the Blues.

Over the next two years, Hines was a regular senior player. His 20 matches on a wing or at half-forward in 1945 included Carlton’s easy victory over North Melbourne in one Semi Final, followed by a stirring win over Collingwood in a bitter and physical Preliminary Final. In the aftermath of that bloody clash, Carlton's Fred Fitzgibbon was found guilty of striking Collingwood enforcer Len Hustler, and suspended by the tribunal for four matches. A few days later, Hines also suffered a huge disappointment when he was omitted from the Grand Final team to play South Melbourne, and replaced by Alex Way. As has been extensively documented, Carlton then went on to beat the Bloods by 28 points in the most spiteful and controversial Premiership play-off of them all.

However, Hines’ dignified reaction to his omission from the flag side, and his genuine joy at Carlton’s achievement, endeared him to his team-mates. Rather than sulking, he was as keen as ever over the following two seasons, even though he was never the first player picked each week. He missed out on a place in another dramatic Grand Final victory for the Blues in 1947, and bid farewell to VFL football after Essendon defeated the Blues by 28 points at Princes Park in round 6, 1948.

Ron Hines created enormous confusion at Preston when he joined fellow wingman and pre-war player Ron Hind on the list. Fortunately for spectators, Hines (the Carlton player) managed just 16 games in his two years with Preston.