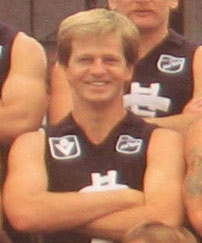 
Born in October 1957, Brown would be 26 before he would get to play his first game of VFL / AFL footy in 1983. It would be his first of two, providing 1 goal, for the 192cm Blue who wore the number 30 on his back. Brown shared his debut with Bruce Reid.

Brown was recruited from Old Melburnians in the Victorian Amateurs.

Gained some notoriety in March 2018 in his position as Deputy Headmaster of Trinity Grammar (Kew, Melbourne) when he was sacked for cutting a student's hair on school photo day when it did not meet school guidelines.