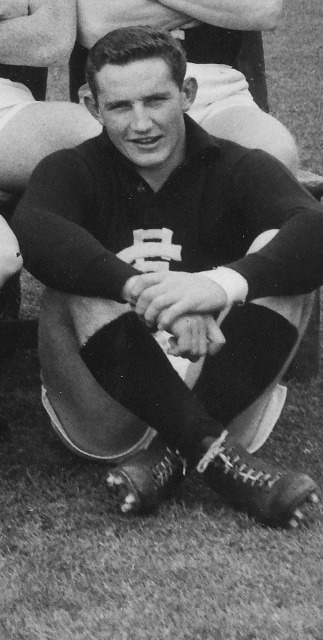 
Recruited from Longford, Tasmania in 1964, Roger Hoggett was a capable centreman who played 12 senior games for Carlton in successive seasons, and was voted our Reserves Best and Fairest in his debut year.

After impressing in his first half-dozen games in the lower grade, Hoggett was selected to make his senior debut as 20th man in Carlton’s clash with Geelong in round 11, 1964. Wearing guernsey number 36, Roger got just the briefest of runs in the last few minutes against the Cats, and was omitted the next week. He returned to play in rounds 13 and 14 against Hawthorn and Melbourne respectively, but from then on, spent the remainder of the year with the seconds. There, his influence around the middle of the ground won him the Best and Fairest, and kept him firmly in the selectors’ sights.

During the 1964 off-season, Princes Park was at the centre of one of the most sensational episodes in VFL history, when a boardroom coup installed the rambunctious George Harris as the 21st President of the Carlton Football Club. Harris immediately created a storm by convincing Melbourne champion Ron Barassi to take on the role of captain-coach of the Blues. Barassi accepted, and hit the ground running. Over the summer months, Hoggett and the rest of Carlton’s list was put through a searching pre-season.

Quite early on, Barassi decided that Ian Collins was his preferred centreman, and told Hoggett that he could make the back pocket his domain if he wanted it bad enough. However, after the first six matches of 1965 Barassi had a rethink, and in round 7 he switched Collins to the last line of defence against Essendon. Collins’ tenacity and dash was instrumental in a surprise win by the Blues, and from that afternoon on, Hoggett’s place in the side was tenuous at best.

In round 11, Carlton met St Kilda for the first time at Moorabbin. It was a tense, even contest all afternoon between two of the top four sides, and scores were level with just a minute or two to play. It was then that former Blue Bruce McMaster-Smith snapped a clever goal, and pinched the win for the Saints. Hoggett was one of five Blues omitted from the seniors after that loss, and he wasn’t able to reclaim his place before season’s end. Shortly afterwards, he was told that his services were no longer required.

Three years after leaving Princes Park, Hoggett was appointed captain-coach of NSW powerhouse Western Suburbs, and led the Magpies to a Premiership in his first season.