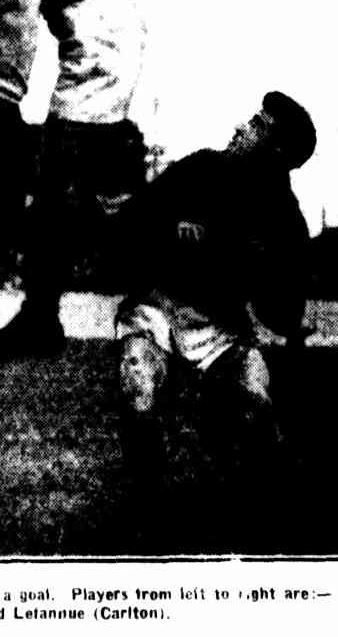 A lively rover and forward pocket who averaged better than two goals a game during a brief stay at Princes Park in 1933, Roderick ‘Doc’ Leffanue was the 500th individual to play senior VFL football for Carlton.

Originally from Middle Park, he was recruited by South Melbourne as a teenager, and played 12 senior games for the Bloods between 1930 and ’32. Throughout those same years, the Southerners embarked on an interstate recruiting drive that brought a wealth of talent to the club, as well as the 1933 Premiership. In the meantime however, Leffanue was one of a number of players squeezed out.

Doc found a new home at Princes Park with the Navy Blues, and was an instant success. Wearing guernsey number 34 and playing out of a forward pocket alongside champion full-forward Harry ‘Soapy’ Vallence, he kicked three goals on debut against St Kilda in round 7, another three against Footscray in round 8, and five against North Melbourne in round 9. Meanwhile, Soapy was equally busy, with tallies of 5, 9 and 3 in the same games. It seemed that Carlton had discovered a potent new forward combination – at least until round 12, when Soapy went down injured in a big loss to South Melbourne.

That injury took the edge off Vallence’s dominance for the rest of the year. Although he only missed one match and Carlton still qualified for the finals in third place, the chemistry between he and Leffanue wasn’t quite the same again. This was obvious in the first Semi Final, when all of Carlton’s forwards were well-held and the Blues suffered a shock loss to Geelong.

Although he was yet to see his 21st birthday and had shown glimpses of real potential, Doc moved on from Princes Park after just that one season. In 1935 he joined Coburg in the VFA, and three years later crossed to rivals Port Melbourne.

Footnote:
In 1937, Leffanue was recorded as playing for Dunlop against Carlton Brewery, in the first Semi Final of the Saturday Morning League, on July 30.