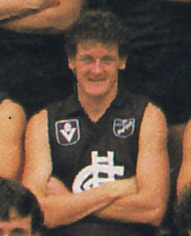 In 2008, The Age newspaper nominated former Blue Ricky Nixon as one of Australian football’s five most influential figures of the decade. After playing a total of 63 games with Carlton, St Kilda and Hawthorn between 1983 and 1993, Nixon had retired from the field to create Flying Start; a sports management company that met with spectacular success. Many of the biggest stars of the game became Nixon’s clients, and he was an admired, respected figure – until his world, and his business disintegrated amid public scandal and ridicule.

Nixon began his football journey as a promising junior at Bendigo League club Golden Square, from where he and his team-mate Greg Williams represented Victoria in the elite Teal Cup Under-17 national championships. Renowned for his long kicking, Nixon took part in the 1979 Sunkick final and was voted BFL Under-18 Best and Fairest, before he and “Diesel” Williams were invited to try out with the Navy Blues.

As has been often noted, Williams was not retained on Carlton’s list, but Nixon was. A free-running all-rounder who took the odd spectacular mark, he graduated through the Under-19 and Reserves teams to make his senior debut in round 15, 1983 against Melbourne at Princes Park - on the same day that Bruce Doull played the 300th game of his celebrated career. After wearing guernsey number 53 in his first season, Nixon had switched to number 48, becoming only the second Blue (after Geoff Hocking) to wear those numerals onto the field in a senior game.

Like others, Nixon found it hard to crack into the strong Carlton line-up of the early eighties, and a broken ankle after two more appearances in 1984 didn't help his chances. He always seemed to find himself as an emergency for the seniors, so, after celebrating his first career goal in Carlton’s good win over Fitzroy in round 20, 1985, he asked Carlton for a trade to another club. Nixon had planned a three-month overseas holiday at the end of that year – a trip that had been approved by Carlton’s senior coach David Parkin. However, problems arose when Parkin was abruptly sacked, and replaced by Robert Walls, who told Nixon to cancel his holiday. Nixon refused, and that was the end of Ricky’s stay at Carlton.

Somewhat disillusioned, Nixon headed back to Golden Square in 1986, where he soon recaptured his old form. He impressed during an inter-league game, and that led to approaches from Geelong and Essendon. But Carlton would only deal with St Kilda, so a transfer to the Saints was eventually agreed upon, and Nixon was a popular clubman at Moorabbin throughout his stay from 1986 to 1991. In that time, he added 51 games and 32 goals to his career tally.

In 1992, Nixon crossed to Hawthorn to finish off his playing days with another eight games in the brown and gold. Up until that time, his life outside football had revolved around his position as a physical education instructor at Carey Grammar School. But during that time, Ricky had developed an ambitious plan to start a sports management company with a different approach - and within a few short years he had gone a long way toward achieving just that. Among many innovations, Nixon introduced the group marketing of elite athletes with his Club 10 concept, where his clients included Gary Ablett Snr, Wayne Carey, Jason Dunstall, Tony Lockett and Gary Lyon. Later he also represented Matthew Richardson, Ben Cousins, Nick Riewoldt and others.

Meanwhile, he opened a fitness centre at Docklands Stadium, and a nearby sports bar in association with music entrepreneur Michael Gudinski. While commenting on football matters on Melbourne radio, he created an on-line course in sports administration and management, as well as establishing a pathway for young Irish Gaelic Footballers to AFL teams. In 2010 he published a popular semi-autobiography entitled “It’s a Jungle Out There – The Inside Story of Managing and Marketing the Game’s Biggest Superstars,” and his career seemed to have no limits.

However, there were storm clouds gathering. In 2009, Nixon had crashed his car into a tram, and been convicted of drink-driving. His reputation survived at first, but less than two years later a huge scandal erupted when he was secretly filmed almost naked in a hotel room with a 17 year-old girl – amid accusations of coercion and drug use. The fallout was enormous. The AFL stripped him of his manager’s licence for two years, and his business empire progressively crumbled. Most of his clients bailed out, even as Nixon continued to deny the more serious charges.

Over the next half-dozen football seasons, Nixon became tabloid newspaper and trash television fodder. In a new venture, he joined the pub circuit, doing stand-up “boys night” shows either solo, or with other ex-players like Warwick Capper and Mark Jackson. The court appearances continued too, on domestic violence charges and another string of traffic offences.

In 2015, Nixon created more controversy when he wrote a second book; “My Side,” in which he made salacious claims about the teenager at the centre of his demise. At first referred to as “the St Kilda schoolgirl” her identity had soon been revealed as she was swept into the vortex, and for a while, she too, openly courted publicity. But when she objected to certain passages in the book, she began court action to have them removed. The trial judge disagreed however, and publication went ahead.

Early in his career at Carlton, Nixon enjoyed some spectacular success as a forward with the Blues’ Under-19 team. In 1982, on the way to kicking 64 goals for the season, he booted 12 against Essendon in round 12, 9 against Melbourne in round 15 and 8 against North Melbourne in round 21.
It’s hard to believe, but the Blues youngsters finished fifth that year, and lost an Elimination Final to Fitzroy by 85 points!