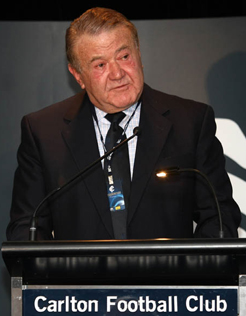 Richard Pratt - the player - was recruited from Lemnos in country Victoria.

In his time at Carlton, Pratt :

Pratt was also in the squad of the U19s Premiership team in 1951.

Pratt would later contribute to the Club off-field in a number of ways, both financially and at Board level. His company Visy employed many Carlton football players.

On February 9, 2007 Richard Pratt was announced as President of the Carlton Football Club, leading the Blues through a series of huge announcements as the resurgence of the Mighty Blues gathered pace.

Amid allegations of lying about his knowledge of a price-fixing scandal; Pratt voluntarily stood aside from his position as president of the Carlton Football Club on the 20th of June, 2008.

In his time as president, Pratt was largely responsible for overseeing major changes at Carlton which would help put it back on the track to become a powerhouse again. Some of these changes included the recruitment of the best player in the AFL, Chris Judd; the best chief executive officer, Greg Swann; and arguably the best general manager of football operations, Steven Icke. Apart from these great additions of personnel, Pratt was also largely responsible for bringing in major sponsor Hyundai and for helping the Blues crack 40 000 members for the first time.

In the week leading up to Round 6, 2009, Richard Pratt passed away to great sorrow amongst the Carlton faithful. As Carlton player, sponsor, President and Patron, Pratt was a great Carlton man and will be sorely missed.