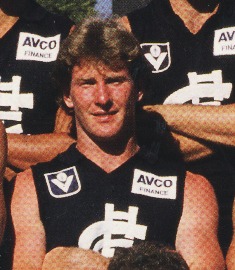 
One of the truly tragic figures in the history of the Carlton Football Club, Rhett Baynes was considered to be the most promising young ruckman in the country when he was recruited by the Blues from Perth, WA in 1985. Another target of Carlton's great interstate recruiting drive that also delivered Stephen Kernahan, Craig Bradley and Peter Motley to Princes Park, Baynes was an imposing 195 centimetres, with a good spring and a safe pair of hands. At just 20 years of age, he had held down centre half-forward for the WA state side against South Australia in 1984.

He was eased into the Carlton senior team in 1985, playing 11 games and contributing six goals – but early the following year, some worrying incidents at training caused concern. These culminated in a bizarre episode where he was interviewed live on television by commentator Jack Edwards during one of the breaks in a pre-season night match. Without warning, Baynes accused Carlton’s Chairman of Selectors, Wes Lofts - and the match committee - of stabbing him in the back by leaving him out of the senior team. The interview was quickly cut short when it was realised that Rhett was in a disturbed frame of mind, although at first, Jack Edwards and Lou Richards thought they had a scoop on their hands.

In the aftermath of that incident, Baynes played just twice more for Carlton, and finished his career in round 21 of 1986 in a big win by the Blues over Footscray at Waverley Park. He went home to Perth, and shocked the football world when he committed suicide in August, 1990. He was just 26 years old.

Baynes wore the No.1 guernsey during a night game in 1985.