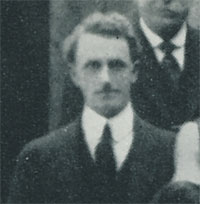 To the Editor of The Argus

Sir, - With reference to report in your issue of to-day on the Carlton-Richmond match, played on Saturday last, I wish officially, to give an empahatic and absolute denial to the various satements made regarding there being - (1) Other reasons for the absence of our captain; (2) Dissastisfaction over defeat by South Melbourne; and (3) a "deal of friction at Carlton." The reason given for Fisher's absence (that he was ill) was correct. He became ill on Friday, is still confined to his bed, and further, stated to-day that he had no intention of transferring, as alleged, to Brunswick.
The relations existing amongst the players and the committee at the present time are exceedingly cordial, and there is absolutely no friction whatsoever, Yours, &c.,
Reginald Hunt
Secretary Carlton Football Club
June 30
(The Argus July 01 1919 p3)

"On the night of 9 January 1925 a committee meeting of the VFL, chaired by Reg Hunt of Carlton, decided to expand the competition from nine clubs to twelve. It was decided in the meeting to admit the "Hawthorn Football Club", along with Footscray and North Melbourne, all three coming from the Victorian Football Association (VFA). Hunt originally recommended Hawthorn, Footscray and Prahran but eventually North Melbourne was subsitituted for Prahran because of ground control matters."
(en.wickipedia.org/wicki/Hawthorn_Football_Club)

In 1925 Hunt would cross to Hawthorn and become that club's first VFL secretary.