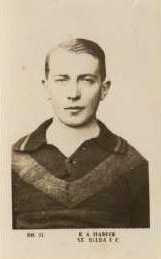 
Wearing guernsey #17, Harper played 2 games for Carlton in his debut year of 1924. He played league football from 1919 to 1925 and played a total of 39 games without a goal. His other league clubs were St Kilda and North Melbourne.

Harper was born in Byaduk, which is south of Hamilton, Victoria. He played at Hamilton College, then at Brighton Grammar prior to being recruited to the VFL.