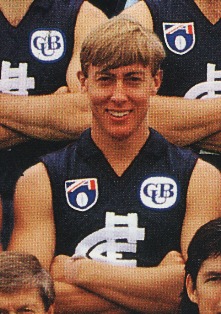 
Peter Green was recruited from Sydney, who had recruited him from Barellan NSW, which is east of Griffith in the Riverina.

Green was a mid-sized defensive utility who played the solitary game with Carlton. The game in question was the Round 10 game versus the Bulldogs at Princes Park, 1994 that Carlton won by 12 points. Green was brought on to the field in the second quarter, and missed a tackle (from memory), and was taken off after only a few minutes. After some strong performances in the seconds, Green was only afforded a short 'time in the sun' at senior level.

George Wickens from a family portrait