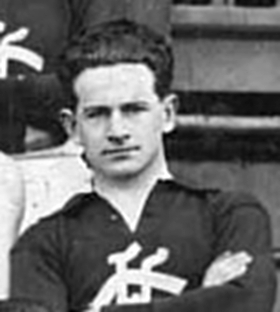 Percy Outram was a small but clever specialist full-forward recruited by the Blues from Wesley College in 1925, via Kyabram (his place of birth). Renowned for his elusiveness and for kicking freakish snapshot goals, he played 24 games in guernsey number 24 between 1925 and 1927, and kicked 43 majors.

After making his senior debut in a decisive home game win over Richmond at Princes Park in round 7, 1925, Outram averaged eight games a season over three years, without ever really cementing a place in the senior team. He actually struck the best form of his career right at the end of his time with the Blues, and that fortuitously opened the way for more opportunity at St Kilda.

In the last round of the 1927 season, Carlton (fourth) met St Kilda (seventh) in a vital clash at Princes Park. Carlton simply had to win to guarantee a place in the finals, while the Saints had set themselves to deny the Blues another tilt at the flag. Carlton selected a big, raw-boned youngster from Chelsea named Charlie Davey on debut at centre half-forward, and he was a sensation. Marking everything that came his way, Davey kicked six quality goals, while Outram and another youngster, ‘Soapy’ Vallence, also chopped up the St Kilda defence. Both bagged four goals as Carlton thrashed the Saints by 55 points.

Despite that good effort however, Outram was left out of Carlton’s team the following week, and could only watch on helplessly when the Blues lost a bruising Semi Final to Richmond by six points. It was probably around then that a still-reeling St Kilda started making overtures to him. Under the circumstances, it’s not surprising that Percy listened hard. But before he could make a move, he had one last obligation to fulfil.

On the Saturday after Collingwood won the 1927 VFL Premiership by defeating Richmond in the Grand Final, Outram, Vallence and Davey all played one last time together when the Carlton seconds took on South Melbourne seconds for the Reserves flag. On that bright afternoon in front of a surprisingly good crowd at the MCG, Davey provided a constant avenue to goal, Outram dazzled again with five goals, and ‘Soapy’ bagged another two as the Blues coasted to a 19-point victory.

Percy departed Princes Park after that minor triumph, and joined St Kilda the following year. There, his career was something of an instant replay of his time at Carlton. His 27 matches for the Saints produced 51 goals–including two when St Kilda lost to Carlton in the 1929 first Semi Final.

Outram hung up his boots for good after the 1930 season, and lived for a decade or so afterwards on the Mornington Peninsula. He volunteered for active service at the outbreak of World War II in 1939, and spent four years in uniform. When hostilities eventually ended in 1945, Percy was a medical orderly at an Australian Casualty Clearing Station. He was discharged in November of that year, and came home to a much different country.

A long life followed, before Percy Dwight Outram passed away on November 3, 1981, at the age of 78.