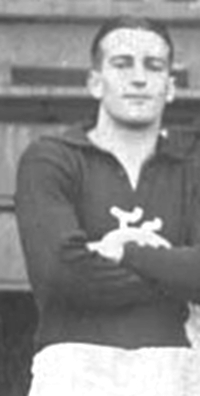 An ultimately tragic figure, Norman Charles Collins played 92 games of VFL football with three clubs - Fitzroy, Carlton and Hawthorn - during the bleak years of the Great Depression. He was a versatile and capable player who was at his best in the centre, but his short life was plagued by psychological problems that led to his untimely death in the year he retired from the game.

Norm and his older brother Goldsmith ‘Goldie’ Collins both began their VFL careers at Fitzroy. Goldie played as a follower in the Maroons’ 1922 Premiership team, before Norm joined him two years later. But after only four senior matches, Norm switched clubs to Carlton in search of more opportunity, and found exactly that with the battling Blues.

Wearing guernsey number 2, he soon established himself in the centre at Carlton, playing 17 consecutive games in 1926, and another 13 in 1927 – the year of the Wall St. crash. The Blues made the finals for the first time in five seasons that year, only to be bundled out of contention by a narrow 6-point loss to Richmond in the first Semi Final.

Collins spent a year away from Princes Park in 1928, and when he returned, found that in his absence, the Blues had not only recruited VFA star Colin Martyn from Coburg – they had passed over guernsey number 2 to him as well! So Collins switched to number 5, and went looking for another niche in the team. He found a place at first on a half-forward flank, before taking on a roving role (in partnership with Tommy Downs) which lasted through to the 1929 Preliminary Final.

On that particular afternoon at the MCG, tensions between the two clubs spilled over into warfare on the field, as Richmond finished off the better to win by one straight kick again. In the aftermath, Tommy Downs was suspended for a whopping 19 matches for striking Richmond’s Don Harris.

Collins managed another 12 games in 1930, while the Blues improved to finish second on the ladder to Collingwood. But when Norm was left out of Carlton’s Semi Final team that lost to Geelong, it was obvious that his time at Princes Park was nearing its end. He played just one more game in navy blue – in round 2, 1931 against his former club at the Brunswick St Oval – and celebrated an emphatic 40-point win. By coincidence, Norm had played his first match for Carlton against Melbourne at Princes Park on his 22nd birthday, and his last the day after he turned 27.

A short while later, Collins joined Hawthorn and was immediately embraced by them. He served as acting captain of the Mayblooms against Essendon in the last round of 1932, and filled the same role twice more the following year. However, injury ended his career prematurely after round 10, 1933, and he had only recently taken up a position as assistant secretary at Glenferrie Oval when sadly, he took his own life on August 28 of that year.