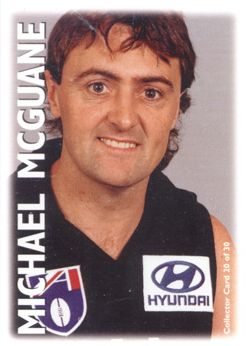 At times during the 1990's, Carlton's recruiting of seasoned players from other clubs almost became an obsession. True, at times it was a worthwhile exercise, bringing to the club the likes of Greg Williams, Earl Spalding, Dean Rice, Matthew Hogg, Brad Pearce and Matthew Lappin. But for every recruiting hit, there was often a miss – like Collingwood’s veteran Premiership star Michael McGuane. A two-time Best and Fairest and a revered figure at Victoria Park, McGuane had asked the Magpies for a two-year contract extension in 1996, only to be knocked back. At 29, he felt he wasn’t finished, and so requested a trade.

With memories of his exploits against the Blues over the previous decade still fresh, the Carlton match committee gambled that McGuane still had some good football left in him, and he was picked up in return for selections 19 and 65 in the 1996 National Draft. The Magpies used those picks to select Brent Tuckey and Brad Cassidy, who between them played 24 games - not a great number, but still considerably more than the three senior matches McGuane was to manage for his new club. Some time after his departure, Collingwood coach Tony Shaw admitted that he knew McGuane was no longer capable of playing AFL football, but that he “allowed Carlton to find out the hard way”.

Certainly McGuane’s brief sojourn at Princes Park was a failure, but there is no denying that beforehand, he had been one the great players of his time. Recruited by Collingwood from Sebastopol on the southern outskirts of Ballarat, he became one of the hardest-running and creative mid-fielders in the game. After starring in Collingwood’s 1990 Grand Final victory over Essendon, he won the Magpies’ Best and Fairest in 1992 and ’93, and was selected as an All Australian in ’92. In round 2, 1994 at the MCG, he kicked Goal of the Year against the Blues, charging off half-back and taking seven bounces in a jinking solo run, before snapping truly from 30 metres.

Soon after arriving at Princes Park however, McGuane attended training in an intoxicated state, and was involved in a punch-up with one of his rivals for a place in the seniors, Matthew Hogg. The Carlton committee took a dim view of the incident, and for a while, his future at the club appeared in jeopardy. Many felt that he was lucky to escape with a fine and a second chance. A few weeks later, McGuane wore Carlton’s number 31 guernsey for the first time in a match for Premiership points, against Essendon on Easter Monday, 1997. Starting from the interchange bench in front of a massive first round crowd of 82,000 at the MCG, he kicked an opportunist goal late in the game, but apart from that, was rarely sighted as the Blues went down by 7 points. Round 2 was also played on a Monday – a night game at the MCG against North Melbourne – and again, he was hardly noticed.

The following Sunday afternoon at Princes Park, Carlton celebrated the opening of the new Legends Grandstand by running out onto the field in a controversial sky blue strip, under a lucrative sponsorship deal with confectionery maker M&M. A host of stars like Williams, Kernahan, Silvagni, Christou, Pearce and Brown were missing that afternoon, and the Blues trailed after each of the first three quarters. But urged on by a roaring home crowd, the team rallied, and with a dramatic last quarter surge, turned a 14-point deficit into a five-goal victory. Among the casualties from the game was McGuane, who broke down with a serious groin muscle tear that ended his season. He never played AFL football again, and retired at year’s end.

Before that happened however, Carlton coach David Parkin asked his high profile recruit to stay involved by working as one of his assistants. Later, Parkin was to agree with ex-Collingwood Premiership coach Leigh Matthews in saying that McGuane was remarkably astute, with the potential to coach at the highest level. And it didn’t take long for that opinion to be tested, because in 2000 McGuane accepted the senior coaching position with Tasmanian club Burnie. In just his second season, the Hawks went through the year undefeated, to claim their first-ever Northern Tasmania Football League Premiership.

In 2000, McGuane took up his first coaching appointment with Tasmanian club Burnie. In 2001, he led them through an undefeated season, culminating in a premiership. McGuane then returned to Victoria to coach Gisborne in the Bendigo Football League for the 2002, 2003 and 2004 seasons. In 2002 all three teams he coached (Under 18s, Reserves and Seniors) won their Grand Final. The seniors won again in 2003. In 2005, McGuane was appointed a part-time scout at Richmond by coach Terry Wallace, but jumped to St Kilda the following year after securing a full-time coaching appointment under Grant Thomas. After Thomas was sacked at the end of the season, McGuane decided to quit.

McGuane then coached the Balwyn Tigers seniors team in the Eastern Football League Division 1 in 2007. He came to the club at a tough time as they move into the highly rated EFL competition 1st Division. McGuane's coaching saw Balwyn into the finals in their first year in the competition. Season 2008 saw McGuane take the reins as Senior Coach at the Keilor football club in the EDFL where they were the eventual premiers. In 2016 Mick again took Keilor in the grand final for his 2nd premiership cup as coach. Mick will again take the reins at Keilor in 2017 for a 11th consecutive season as coach.

As far as his football career is concerned, Mick McGuane will always be remembered as a Collingwood star. As for his brief and barren stay at Carlton, it is perhaps best forgotten by all concerned.

1912 - Lang to approach league to have disqualification removed.