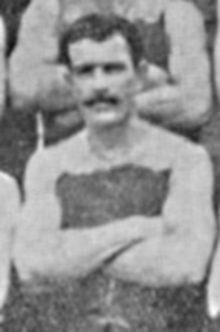 There were 149 Blues before him, but few were more accomplished, more inspirational and ultimately, more tragic than Michael John “Mick” Grace. In a star-studded career that began prior to the foundation of the VFL in 1897, he wore the colours of Fitzroy, Carlton and St Kilda, played in four Premiership-winning teams, and won just about every possible individual honour the game could provide. Then, sadly, only a few years after his last match, Grace died of tuberculosis at the age of 37.

Mick and his older brother Jim Grace were already established stars at Fitzroy when the VFL burst into life in 1897, and the Maroons embarked on a period of dominance that would last almost a decade. Both men were strong, long-kicking key forwards, while Mick’s stamina, marking prowess and astute reading of the play also made him an exceptional follower – as was shown when he was Best on Ground in Fitzroy’s first Premiership victory in 1898.

He won a second VFL flag with the ‘Roys in 1899, and just missed out on the hat-trick when Melbourne outlasted Fitzroy by 4 points in the 1900 Grand Final. In the process, Mick was the Argus newspaper’s Footballer of the Year in 1898, won Fitzroy’s Best and Fairest trophy in 1898 and 1900, and in between, represented Victoria against South Australia in 1899.

Surprisingly, Grace retired from VFL football after that third straight Grand Final, only to be talked into a comeback at Carlton in 1903 by another former Fitzroy champion in Jack Worrall, who had been appointed the first full-time coach of the Blues the previous year. Mick soon showed that he had lost nothing in regard to skill or finesse during his brief break from the game, and played a big part in lifting the Blues into the finals for the first time ever that same year.

In 1904 he played most often at centre half-forward, where his consistency was rewarded by selection in the Victorian state team for a second time. He booted 26 goals for the year to head Carlton’s goal-kicking list, while the Blues just kept on improving. After beating Essendon in a tight Semi Final, Grace lined up in his fourth Grand Final against his former club, but Fitzroy proved too good again and won by 24 points.

Fitzroy did it once more in 1905 when they knocked the Blues out of the Preliminary Final, but a year later, Carlton took revenge on the Maroons in the most emphatic of ways - we thumped them by 49 points in the 1906 Grand Final and claimed our first glorious, precious Premiership. Grace kicked three goals that afternoon at the MCG, topping off a great year for himself and his club. His 50 majors for the season set a new VFL and Carlton goal-kicking record, and did nothing at all to harm his reputation as a superb big match performer.

In 1907, the Mick Grace story took another twist when he retired again after playing through the first ten matches. Carlton was perched on top of the ladder at the time, but his withdrawal was still a big blow to the team. And it became even more so in the aftermath of a controversial game against South Melbourne at the Lake Oval in round 15. Two of Carlton’s best big men; Jim Marchbank and Fred Elliott, were suspended afterwards – for seven and four matches respectively – ruling them out of the remainder of the season.

Almost in desperation, Jack Worrall approached Grace (who by then was playing with VFA club Brighton) and eventually convinced him to return to Carlton for the finals. Mick stepped in to lead the Blues’ ruck, and booted four goals in a big Semi Final win over St Kilda, then followed up with another tireless effort in Carlton’s fighting five-point victory over South Melbourne in the Grand Final. The Blues had won back-to-back flags, and Grace was feted as the saviour of the team.

He moved on after that (as Worrall had agreed he would) and in 1908 joined St Kilda. As tough and durable as ever, he kicked 26 goals in 16 matches for the Saints, and ironically, finished his career after Carlton beat St Kilda by ten goals in the 1908 Semi Final – en route to a third successive Premiership under Jack Worrall.

In the years after his VFL career ended, Grace took up coaching and spent some time in NSW. But by 1912 his health had deteriorated, and he was back in Melbourne suffering from tuberculosis. The Football Record reported: "Mick Grace, who was a great player in the land when with Fitzroy, Carlton and St. Kilda, is very ill in the Broadmeadows Sanatorium. The secretary of the League (Mr. E. L. Wilson), and Messrs. A. A. Manzie and E. W. Copeland, have been deputed to inquire into the circumstances of his wife and family, with the view to assisting them if necessary. The New South Wales
League has intimated that it will cooperate in any movement for the assistance of Grace, who was coaching players in Sydney last season".

In May of that year, Michael John Grace passed away at Heidelberg Hospital, aged just 37.

"Mick Grace, who has been one of the best players in Victoria for some years, has definately retired. Playing far below his form for Carlton this season he has come in for a lot of "barrack" from Dark Blue supporters, and this has probably had the effect of making him end his football career a little earlier than otherwise would have been the case. Only last year he was testamonialised for his fine play. Shows how fickle the public is!" (Arrow, Sydney, p6)

"Mick Grace who held the individual football championship here probably longer than any other player, has migrated to Sydney to fill the position of coach of the N.S.W. League. After knowing Grace for many years one can only congratulate the League on its choice. He has the unique experience of being in about seven premiership teams, playing with Fitzroy and Carlton, and it is not too much to say that each premiership was mainly due to his wonderful skill and brainy work on the field. "Mick" is cut out for a mentor to young footballers, for he has proved here that he possesses the power of imparting a knowledge of the game to the highest degree. One has never seen a finer follower and forward than the same gentleman."
(Referee July 06 p11)

"Mick Grace was a real champion, and what enhanced his usefulness from an onlookers point of view was that his every movement was so graceful. He was a beautiful high mark, and a splendid spiral punt kick, a really dangerous man in the vicinity of the goal posts, and he used his head as well as his feet."
(Trove: Australasian September 03 p7)

A Chat With "Mick" Grace - The Art Of Play

Brother Joe Grace came down from Sydney and played in a practice match against North Melbourne (April 22 1905) playing at full forward he kicked 2 goals and was named one of the Blues better players up until half time when the match report ended. Carlton won by 95 points.

The Fitzroy and Carlton clubs organised a benefit concert at the Fitzroy Town Hall held on 8 September 1909, to raise funds for Grace, who was described in The Argus as "in indifferent health". A sum of £253/7/6 ($506.75) was raised.
The following month, a football match between the League and Association umpires played on the Richmond Racecourse on October 16 raised £48 ($96) for the Grace Fund.
1912 July, the V.F.L. voted to donate £25 to the fund for Mick's widow and children.