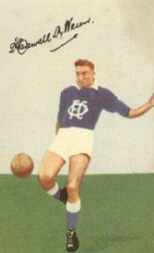 Wearing guernsey #18, Wenn played 26 games for Carlton after debuting in Season 1953 after being recruited from VFA club Oakleigh. He kicked an impressive 38 goals in his time at the Blues playing as a centre half forward. In Wenn's final game, he broke and ankle during the game, and unfortunately Wenn would not return to senior action for the Blues after sustaining this serious injury. Wenn retired at the end of the 1954 season.

For the superstitious amongst us, Wenn was Carlton Player no. 666.

His son David was a premiership ruckman with Oakleigh in the VFA in 1972.

Max Wenn was a talented half forward from Berwick who was a key figure in Oakleigh's 1950 and 1952 premiership-winning sides. Recruited by Carlton, he quite impressed during a 26 game, 38 goal stint in 1953-4, but was then surprisingly released. Despite allegedly being chased by several VFL clubs he opted to return home to Oakleigh. 1

1955 The Argus April 13;
"Carlton centre half-forward Max Wenn decided last night to retire from League football. Wenn has been troubled by an ankle injury which is responding slowly to treatment. He also has business obligations which will not permit him to train."