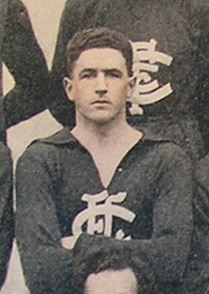 He played the last three games of the season on the last line – apparently, without setting the field on fire – then was left out of the Semi-Final team that beat St Kilda, and the Preliminary Final side that lost yet another cliff-hanger to Richmond when their champion full-forward Jack Titus snapped the winning goal right on the siren. A small consolation at the end of the season was that Maurie finished equal third in the reserves VFL competition best and fairest award.

Princes Park without the Heatley Stand 2008