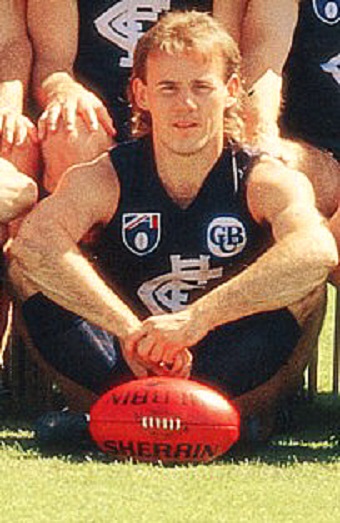 After recovering from rejection at his first AFL club Essendon, Matthew Hogg went on to forge a fine career - first at Footscray, and later at Carlton where he was a member of the Blues’ all-conquering 1995 Premiership team. A wingman or small forward to begin with, Hogg evolved into a close-checking midfield tagger at Carlton, where his 114 games included three Grand Finals.

Matthew was playing junior football for his local club East Keilor when Essendon recruited him for their Under-19 squad in 1984. Later that year however, the Bombers’ renowned junior coach Ray Jordan told the youngster that he was too small and too slow for VFL football, and that he should go back to East Keilor and “enjoy playing with his mates”. Hogg was devastated of course, but when his father promised to contact a friend involved in recruiting at Footscray, Matthew was filled with a fierce desire to prove Jordan wrong.

After Footscray took a look and decided to give him a second chance, Matthew became entrenched in the Bulldogs’ Under-19 team, and by 1986 was enjoying occasional games with the Reserves. He knew the next step was much harder, so he went to a professional running coach during the off-season and later said it was one of the best decisions he ever made. His speed off the mark improved dramatically, and the confidence that gave him lifted his game to new levels.

Hogg was eventually selected for his first senior game for the Bulldogs in the opening round of 1988 against Sydney at VFL Park, Waverley. A dominant last quarter got Footscray home and Hogg played with a maturity that continued throughout the season. He averaged 17 matches per year in 1988-89, before names like Royal, Wallace, Hawkins, McGuiness and Liberatore began to squeeze him out, and he started to think that he might be better off at another club. Some discussions with other teams obviously took place, because after 59 games for the Tricolours Matthew registered for the 1991 National Draft, and Carlton snapped him up with their first selection at number 18.

At Footscray, Hogg had worn guernsey number 43 in all of his senior appearances. Upon his arrival at Carlton however, he had to choose an alternative, because a promising youngster named Anthony Koutoufides had already claimed it. Number 33 was available, so Matthew settled for that and wore it for the first time in round 2, 1992, when Carlton scored an upset win over the reigning premiers Hawthorn at Princes Park. Although Blues coach David Parkin had recruited Hogg with a specific role in mind – that of a midfield stopper – he was tried in a back pocket on debut and delighted his coach on the way to playing 17 games in an impressive first season.

Hogg experienced the first final series of his career in 1993, and it should have ended in premiership glory. Instead it brought the bitter taste of failure when Essendon humiliated Carlton in a one-sided Grand Final. Although Blues captain Stephen Kernahan was valiant in defeat with seven goals, and Hogg quelled the Bombers’ dangerous Darren Bewick to be one of Carlton’s few individual winners, too many Blues were found wanting.

“Hoggy” was even more resolute as season 1994 unfolded, and his consistency was rewarded by selection in the Victorian state squad for the game against South Australia in Adelaide in early May when the Croweaters beat the Vics by two points in a cracker of a contest. Then in August, the Blues finished the home and away rounds in second place on the ladder behind West Coast, only to crash out of flag contention once more with consecutive defeats at the hands of Melbourne and Geelong.

Those two empty seasons spurred the Blues toward redemption on 1995, but Hogg almost missed out again. During pre-season training, he suffered a stress fracture in one of his feet, and surgery was required to repair the damage. While he recovered, Carlton assembled a mighty team that dominated the home and away rounds and lost only twice before Hogg fought his way back for round 22 against Essendon at the MCG. A month later, the rampant Blues destroyed Geelong by ten goals in the Grand Final, with Hogg a important cog in a well-balanced machine. Given the task of running with the Cats’ link-man Leigh Tudor, Matthew hardly gave his man a sniff of the football, and richly deserved his Premiership medal.

Despite glowing predictions in the press that a Carlton dynasty was inevitable, Hogg didn’t play finals football again until 1999, when his second-last appearance in navy blue came in Carlton’s sensational victory over Essendon in the Preliminary Final. A week later, after a somewhat anti-climactic loss to North Melbourne in his third Grand Final appearance, Matthew pulled down the curtain on a career that saw him admired and respected by everyone connected with the game.

Not quite ready to retire for good after departing from Princes Park, “Hoggy” joined a couple of ex-Blues in Damien Lock and Damian Lang at VFL club Coburg-Fitzroy in 2000, for one last season of “playing with his mates”.