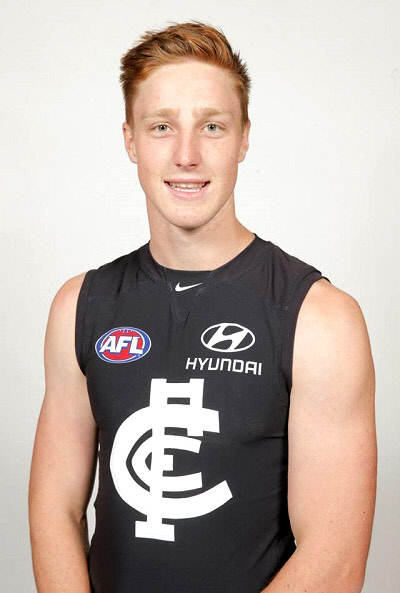 Originally from Macedon in country Victoria, Matthew Dick had played 14 games of TAC Cup football with the Calder Cannons before he was recruited by the Sydney Swans at number 64 in the 2012 National Draft. A rangy defender with an attacking attitude, he spent two years in the Harbour City without managing to break into a powerful Swans starting line-up, then was delisted when his contract expired.

Meanwhile, Carlton had been keeping tabs on the red-haired youngster for some time – impressed by his speed and ball use — and when he was let go by the Swans, the Blues pounced. “We looked at who was on the edge, and who wasn’t quite getting a game and who we could get some benefit from,” Carlton Football Operations Manager Andrew McKay said when Dick agreed to terms, “and his name came up a number of times. He’s got a good, penetrating kick, and good leg speed, and they are the two key ingredients we want to improve in.”

Dick joined an exclusive group of VFL/AFL players when he made his senior debut for Carlton against St Kilda in Wellington, NZ on Anzac Day, 2015. The game was the first ever played by Carlton for premiership points on foreign soil, and resulted in the Blues’ first win of the season, by an impressive 40 points. Unfortunately for Dick - who started the match as Carlton’s substitute - he didn’t get a run until the last quarter, and rarely touched the football.

Sent back to the VFL with the Northern Blues after those few brief moments in the spotlight, Matthew had to wait until round 7 for a recall, when Carlton hosted his former club in a crunch match at Docklands. This time, Dick was on the ground from the opening bounce, only to spend the afternoon watching the ball sailing over his head as the Blues were swamped in the second half to be beaten by 78 points.

Another lengthy stretch with the Northern Blues followed, before Matthew earned promotion for a third time, and wore his number 31 guernsey across half-back in the last four matches of the season. Racking up 19 and 17 disposals respectively in the last two games, Dick was one Blue who showed promise in a horror season for the club.

Under Carlton’s new senior coach Brendon Bolton, Matthew was expected to push for a regular senior place in 2016, but that proved not to be the case. After playing another 14 games for the Northern Blues without earning promotion, he tore a hamstring so badly it prematurely ended his season, and in late August, a few days after Carlton’s last match of the year, he was told that his services were no longer required.

Matthew Dick would return to his junior club Macedon for the 2017 season who play in the Riddell's District Football League, Dick played a key role in their 2017 premiership win over Rupertswood.